The Garden is an artwork thematically based on the biblical garden of Eden, a reference by sculptor Paul Dibble to New Zealand as an antipodean paradise. It is a subject re-visited in the artist’s works dating from the mid ‘80s and returned to many times over the decades that have followed. The artwork features a female torso juxtaposed by a leaf falling; a slow gracious fall just landing to balance upright. The movement of the leaf suggests the passing of time with the seasons. It signifies the change in the land, the early settlers finding paradise then altering to suit their purpose by clearing and planting it.

From front view the sculpture’s forms appear monumental with full solid shapes. But when approaching from the side view they can be discovered as actually being in semi-relief with thin, delicate edges and a form lending towards abstraction. Thus, is contained the classical elements of the European notions of sculpture, yet with its South Pacific origins enacted as in the almost two-dimensional quality of canoe prows. Contrasted to this is the apple, as from the forbidden garden, modeled completely in the round and gilded.

The sculpture was originally exhibited at the Hawke’s Bay Exhibition Centre in Hastings for the 2003 Norsewear Art Award, when Dibble was guest artist. It now returns, a permanent home in Havelock North with the help of a generous donation from the Mills Family Charitable Trust. 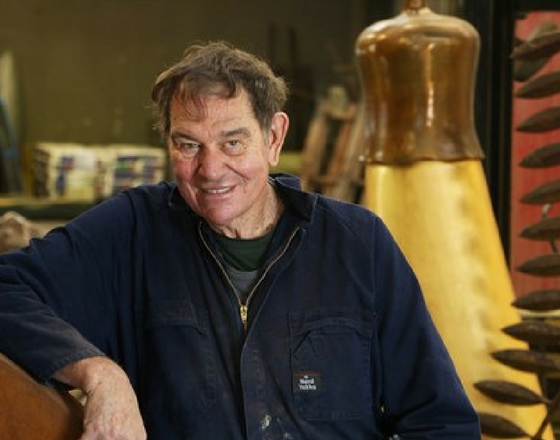 Paul Dibble is an artist of considerable vision and drive. A contemporary sculptor working in bronze, he can be located within a twentieth-century European sculptural tradition. Much of his work is concerned with the human figure in all its heroism and frailty. Recognisable objects drawn from the contemporary life and history of New Zealand and the Pacific are also a large part of his oeuvre. These objects and figures form fragments of many narratives. Ideas which begin as beautiful fluid line drawings are worked and reworked to a point of perfect balance before being modelled and cast.

From a foundry in Palmerston North, Dibble casts all his own work with the help of a small team of highly skilled assistants. These sculptures vary in size from 350-millimetre-high Marquette to large works of over 5.5 metres in height. The casting in bronze of one’s own work is virtually unheard of in New Zealand, particularly on such a large scale, and is in itself a technical feat requiring considerable skill and experience.
November 2006 Dibble’s memorial sculpture in London’s Hyde Park was unveiled. This commission was awarded by the Ministry of Culture & Heritage and commemorates the relationship between the two countries and those loyal New Zealand servicemen who fought in armed conflict alongside Britain. The work consists of sixteen vertical bronze pieces over seven feet high. Their surfaces are detailed with reminders of home – pipi shells, korus and rugby balls, alongside exerts of New Zealand poetry and quotations.