This refreshingly authentic depiction of finding love right on your doorstep, and from unlikely directions, abounds with humour and the transformative power of song.

Time-worn Ava, an Irish-British teacher’s assistant, single mum and grandmother, has been round her hard-scrabble block enough times to disbelieve when romance beckons with manically cheerful Ali, a Pakistani-British part-time DJ and landlord who mainly spends his time ferrying about his tenants’ children. Despite an instant and easy rapport, life is too complicated – Ava has an overprotective teenage son, Ali is “separated” from but still living with his younger wife – for any headlong rush. Not to mention their clashing musical tastes: Ava is a folk and country fan, while Ali relishes techno and rap. But should different temperaments, musical and otherwise, be an impediment to love?

“A pair of wonderfully winning performances from Claire Rushbrook and Adeel Akhtar lie at the heart of this unexpectedly warm and typically compelling drama from British writer-director Clio Barnard (The Arbor, NZIFF2010). Described by its creator as a love story about two people who are ‘a catalyst for change in each other’s lives’, it’s a heartfelt piece that marries the poetic grit of Barnard’s 2013 film The Selfish Giant (NZIFF2013) with something resembling a later-life Romeo and Juliet romance – a fable grounded in reality. Ali & Ava is a vibrant work that uses the transcendent power of song to turn a streetwise tale into a diegetic musical, with genuinely surprising results.” — Mark Kermode, The Observer 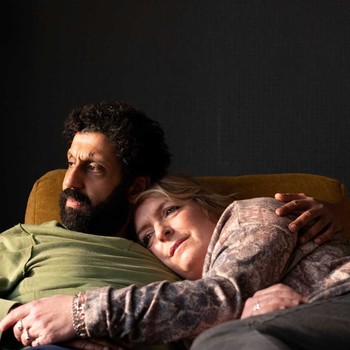