A gloriously animated fantasy reimagining of Anne Frank’s story from the lauded director of The Congress (NZIFF 2013) and Waltz with Bashir (NZIFF 2008).

When lightning strikes the world’s most famous journal at the Anne Frank Museum, the spirit of Anne’s imaginary friend Kitty (voiced by Bridgerton’s Ruby Stokes) is brought to life. When Kitty’s memories are reawakened by reading Anne’s diary, she sets out on a quest to solve the mystery of what happened to her beloved creator decades earlier, leading her on an adventure that traverses both war-era Germany and contemporary Amsterdam. — Nic Marshall

“Revisiting the fusion of historical narrative and wondrous animation that made his Oscar-nominated Waltz with Bashir so uniquely poignant, this profoundly inventive fable from Israeli writer-director Ari Folman examines the life of Anne Frank from the perspective of someone who existed only in the beloved diarist and Holocaust victim’s imagination… Simultaneously heartbreaking and inspiring, Where Is Anne Frank contains a dash of romance, a grand adventure, and a series of sobering realisations regarding atrocities past and present, as Kitty befriends a young refugee whose family is on the cusp of being deported to a home country where peril awaits. The film’s imagery shifts seamlessly between representations of the real world and dreamlike visions… By the end, we come to understand that history is a living thing, so long as we remember to heed its lessons.” — Diana Sanchez, Toronto International Film Festival 2021 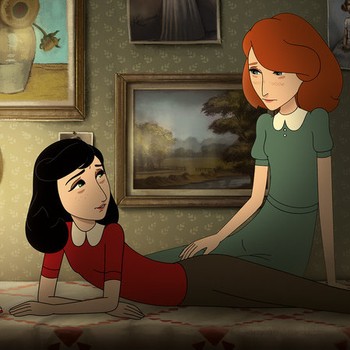