Peter Ireland’s oil paintings on paper showing in the Alcove Gallery intersect with, but are not shaped by, the usual “New Zealand” symbols. These paintings reflect Peter Ireland as a religious painter - his use of symbolism draws on Christian concepts of signification as well as Renaissance painting traditions and exemplars. It is not that the motifs in his art point beyond themselves to transcendent meaning, or that representations usher the viewer into contemplative understanding. Ireland does not have some doctrinal cargo to unload on the viewer, but he does attach his work to the language, history and examples of religious painting in European tradition, which he brings into alignment with a colonial history. This is accomplished in a way which leaves the viewer uncomfortably situated between different orders of meaning and understanding and what traditions might mean.

His paintings comprise subtle layering of almost map-like renditions of place, superimposed on each other. The underlying meanings and symbolism carried from elsewhere are overlaid on the features of the world here. The works indicate accommodation and distance, contradictions of discovery, encounter and settlement.

Peter Ireland is a self-taught artist and has been painting full-time since 1976. His first public show was in 1981 and, since then, he has been involved in almost 100 exhibitions. His work is held in many private and public collections including Te Papa, Christchurch Art Gallery and the National Library Gallery. 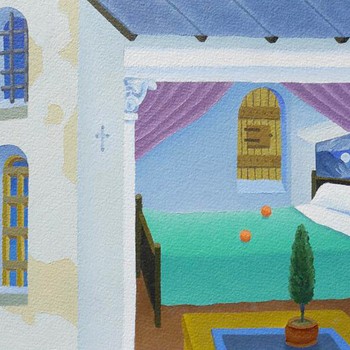