Tickets available for the 2nd show on Saturday 2nd July


For the first time in 2022, rock band BLACK SMOKE TRIGGER is performing live and set to blow the doors off the legendary Cabana in Napier.

New Zealand quartet BLACK SMOKE TRIGGER is a band on a mission, constantly challenging themselves to create a unique brand of modern hard rock that’s instantly recognizable. “We’re not satisfied playing the same kind of songs as everyone else,” band founder Charlie Wallace states emphatically. “We’ve progressed hugely in our first couple years as a band. We're about to enter the studio for our next record, and we’re homing in on our distinctive sound and showing people who we are and what we’re made of.”

BLACK SMOKE TRIGGER’s debut EP, Set It Off, jumped onto the Billboard charts at #12 Hard Rock Album Sales and #13 Heatseekers Albums. They logged millions of views on Facebook / YouTube / Spotify for Set It Off’s two singles --"Caught In The Undertow" and "You Can Have it All.” The EP was helmed by legendary producer Michael Wagener (Metallica, Ozzy Osbourne, Mötley Crüe), who says, “I loved their music from the minute we met. Additionally, Mötley Crüe guitarist Mick Mars adds his playing to the EP’s edgy “The Way I’m Wired.”

Catch BLACK SMOKE TRIGGER live at the Cabana for their only confirmed NZ dates for 2022 with special guests FYVEYES bringing their raw, bold, and hard-hitting rock n’ roll - it's guaranteed to get LOUD. 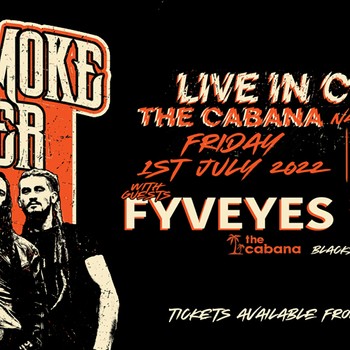