A Catalonian, peach-growing family face upheaval in this moving and nuanced reflection on identity, place and time by Carla Simón (Summer 1993 NZIFF 2017), awarded the Golden Bear at the Berlinale 2022.

For generations, Quimet Solé’s family has spent every summer harvesting peaches in their orchard in Alcarràs, Catalonia. Their landlords, the wealthy Pinyol family, gifted them the land in gratitude for saving their lives during the Spanish Civil War – land which now provides a livelihood for the sprawling Solé clan. More importantly, their identity is rooted in this soil that has been nurtured from father to son.

But eviction looms: Quimet’s father Rogelio never got the land deeds in writing, for back then people kept their word. Now, the Pinyol heir, Joaquim, intends to install solar panels on the property. Fruit prices are so low as to make production unsustainable; solar farms are the future. Some members of the Solé family agree, further enraging Quimet, as siblings and spouses and rebellious teenage offspring clash. Oblivious to the rifts forming and the family’s peril, six-year-old Iris and her twin cousins continue to delight in the orchard’s groves, their imaginations transforming this playground into other worlds. Like the rest of the non-professional cast, they are superb, observed with an unsentimental, deeply empathetic eye in this transfixing ensemble piece with shades of Chekhov. — Sandra Reid 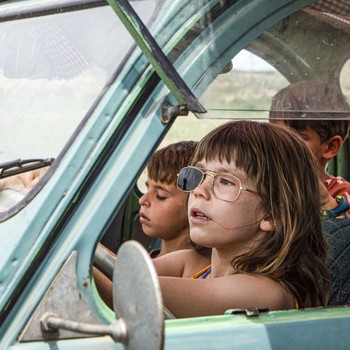