Park Chan-wook makes a welcome return to NZIFF with this masterful and seductive romantic thriller about an insomniac detective investigating a mysterious widow oddly unconcerned with her husband’s death.

While investigating a possible murder case, a detective who employs idiosyncratic investigative methods becomes infatuated with the dead man’s beguiling widow – and potential killer – in this lush, mesmerising murder-mystery, with shades of Hitchcock’s Vertigo, from South Korean virtuoso and NZIFF favourite Park Chan-wook, winner of Best Director at Cannes 2022.

Handsome and happily married ace police detective Hae-joon (Park Hae-il) works the homicide squad in bustling Busan. His wife’s job in the distant seaside town of Ipo means they mainly live apart. Her absence makes things easier when Hae-joon, an insomniac, spends his nights on stakeouts – although the latter are few and far between, given the lack of murders to investigate. All that changes when a man’s body is found at the base of a mountain and Hae-joon encounters the defunct man’s wife, enigmatic and striking Seo-rae (Tang Wei). Curious about her blithe attitude regarding her husband’s death, Hae-joon stakes out her apartment – and continues to do so, long after Seo-rae has ceased to be a suspect… – Sandra Reid

“Crafted with unforced humour, ravishing visuals and commanding maturity, Decision to Leave intoxicates with its potent brew of love, emotional manipulation – or is it? – and obsession… The two leads have smouldering chemistry. As the cop who often speaks like a poet, Park Hae-il conveys the pull between his character’s exacting sense of duty and the more ungovernable forces of his heart, while Tang Wei keeps you guessing about her character right up until the film’s affecting denouement, when her feelings for the detective become unambiguous…

As he showed in The Handmaiden (NZIFF 2016), Park has reached a point in his career where his attention to aesthetics is matched by an ability to probe his characters’ psychological recesses and walled-off emotional chambers in ways both moving and playful — all while navigating multi-layered plots that continue to deliver surprises right up until the end. It’s a luxury to put yourself as a viewer in such capable hands.” — David Rooney, The Hollywood Reporter 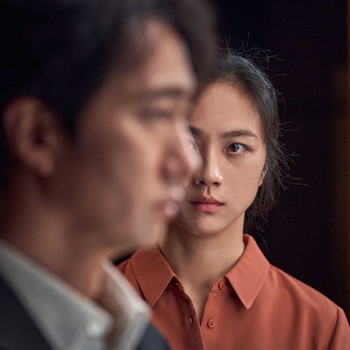