"Andrei Konchalovsky (Runaway Train, The Postman’s White Nights NZIFF 2015) is one of the last remaining Russian filmmakers of the extraordinary 60s generation that brought us Andrei Tarkovsky (with whom he collaborated on Ivan’s Childhood and Andrei Rublev NZIFF 2019), Sergei Paradzhanov and Kira Muratova. His latest feature returns to this era with its grand scope, superb style – exquisite black and white cinematography in the tall Academy ratio – and historical subject matter.

In June 1962, a combination of rising prices and falling wages led the workers of the Novocherkassk Locomotive Works to strike. The strike, an unthinkable disruption in the supposed socialist utopia of the USSR, is violently quashed by the army and KGB, and the massacre is immediately followed by a cover-up that’s just as brutal and unforgiving.

We see the story from the perspective of Lyuda (a powerful performance by Yulia Vysotskaya), a member of the City Committee and hardcore true believer insulated by party privilege, whose life of cosy ideological certainty begins to unravel when her daughter Svetka disappears during the massacre. As she searches for her, Lyuda gradually learns more about what really happened in her hometown, and comes to rely on a friendly – perhaps too friendly – KGB officer who wants to help her. Konchalovsky’s richly detailed film, which won the Special Jury Prize at Venice last year, tells a powerful and complex story fuelled by irreconcilable visions of Soviet society that no amount of rhetorical bluster could paper over. — Andrew Langridge" 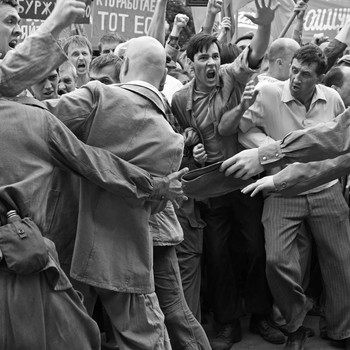