Deception abounds in this nuanced portrait of lies and loss when a middle-aged woman discovers her recently deceased husband led another life in France, contradictory to the pious Muslim home they built together in England.

"Having converted to Islam as a young woman in order to marry her Pakistani sweetheart Ahmed (Nasser Memarzia), Mary (Joanna Scanlan) is content with their gentle, pious marriage. But when Ahmed dies suddenly and she finds in his wallet the ID card of an elegant French woman named Genevieve (Nathalie Richard), she discovers the man she thought she knew so well had been living a double life all along.

With the realism of a Dardenne brothers odyssey and the twisting, tangled web of one of Asghar Farhadi’s domestic melodramas, After Love is an assured feature debut from English-Pakistani writer-director Aleem Khan. Khan himself notes that, at its core, the film questions what is left of yourself when you have changed so much for somebody else. “When that person leaves or dies, how do we begin to recalibrate and find our sense of self again?”

Lensed by First Reformed (NZIFF 2018) cinematographer Alexander Dynan and anchored by a quietly mesmerising Joanna Scanlan, After Love offers a restrained, sensitive portrayal of the loneliness and shame of having been deceived. — Amanda Jane Robinson

“After Love has the agony of a domestic tragedy and the tension of a Hitchcock thriller. Mary herself is the suspense; she is the ticking bomb who could explode at any time. Scanlan shows how she has suffered a triple mortification. Ahmed is dead. So is the Ahmed she knew. And so, perhaps, is Mary herself. She is humiliated and horrified by what she is uncovering on a moment-by-moment basis.” — Peter Bradshaw, The Guardian" 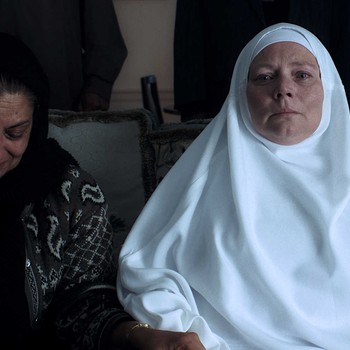 Buy Tickets
NZIFF: After Love Deception abounds in this nuanced portrait of lies and loss when a middle-aged woman discovers her recently deceased husband led another life in France, contradictory to the pious Muslim home they built together in England.