Join us at MTG for our monthly Movie Club. For November we are transporting you back to the 80s for some classic nostalgia!

1pm: The Princess Bride
While home sick in bed, a young boy's grandfather reads him the story of a farm boy-turned-pirate who encounters numerous obstacles, enemies and allies in his quest to be reunited with his true love.
PG
1 hr 33 mins

3pm: Beetlejuice
Adam and Barbara are a normal couple, who happen to be dead. They have given their precious time to decorate their house and make it their own, but unfortunately a family is moving in, and not quietly. Adam and Barbara try to scare them out, but end up becoming the main attraction to the money making family. They call upon Beetlejuice to help, but Beetlejuice has more in mind than just helping.
M
1 hr 32 mins

6pm: Little Shop of Horrors
Meek flower shop assistant Seymour pines for co-worker Audrey. During a total eclipse, he discovers an unusual plant he names Audrey II, which feeds only on human flesh and blood. The growing plant attracts a great deal of business for the previously struggling store. After Seymour feeds Audrey's boyfriend, Orin, to the plant after Orin's accidental death, he must come up with more bodies for the increasingly bloodthirsty plant.
M
1h 43m Director’s Cut. 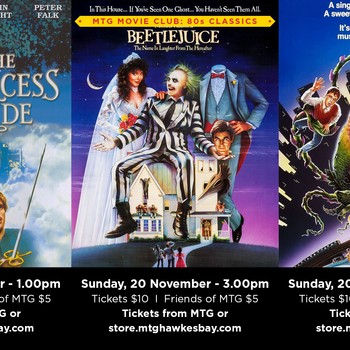 Buy Tickets
MTG Movie Club - 80's Classics Join us at MTG for our monthly Movie Club. For November we are transporting you back to the 80s for some classic nostalgia!