In 2019, while playing a show in Wellington’s San Fran KITA were spotted by international music manager Seamus Morley (Leftfield, Above & Beyond). Morley signed the band to his production company 1965 and put them to work in the studio witH Grammy Award Winning Producer Tommaso Colliva (MUSE / Razorlight).

As COVID-19 hit, the band were midway through recording their debut album with Colliva in Wellington.
Adapting to world changes, KITA have decided to release a 4 track EP ahead of the album which due to world travel restrictions they are now finishing remotely via Colliva’s studio in Milan and Armoury studio in Wellington.
The album is due for release in late 2020

Before the Covid-19 Pandemic, • KITA • were planning a music video shoot for their upcoming single Try to Find a Way when the World went into lockdown. Their song travelled around the planet collecting private video moments from friends and fans during their own COVID-19 Lockdown's and arrived back home here in Aotearoa, New Zealand collated together as the bands debut video.

Since then, • KITA • were the only Australasian band invited to play a set at the UK’s Greenpeace’s - Action All Areas - an online festival -The Greenpeace Field at Glastonbury Festival. June 18-20 2020

The band are now ready to release the title track of the EP, TRY TO FIND A WAY, and are looking forward to playing some live dates around the country. 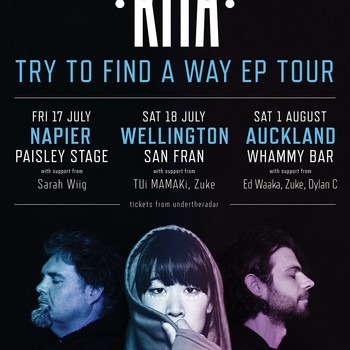