Everything In Its Right Place - MiNDFOOD reviews Hawke's Bay

Words by Ewan McDonald, for MiNDFOOD

From the glamorous Art Deco architecture of Napier, the country-village aesthetic of Havelock North, the heritage makeover of Hastings and all the vineyards, orchards, artisans and accommodation in between, Hawke's Bay has it all.

The vineyard owner mentioned it first. Then the guy at the wine bar. Perhaps the woman who created an idyllic glampsite on her family farm put it best when she said, "We have a special place here. When you're privileged enough to live in a place of significant natural beauty, you owe it everyone else to share it with them."

That special place is Hawke's Bay. Ideally placed on the Pacific Ocean, halfway between Auckland and Wellington, it's one of New Zealand's most popular playgrounds. Perhaps the question is: why did the rest of the country take so long to discover it?

Until the 2000s, the Bay was pretty much known for growing sheep, fruit and vegetables and a catastrophic earthquake, although some of the country's earliest vineyards were planted here.

In the past 20 years the province has put all its ingredients together to make and serve gourmet food and wine, showcase Art Deco architecture, produce festivals and offer stylish boutique accommodation. The region also has some of the nicest people you'll meet. Spend a few days here and it becomes obvious: Hawke's Bay people are proud of their province and want to share its places and produce, its people and productions with their fellow New Zealanders. 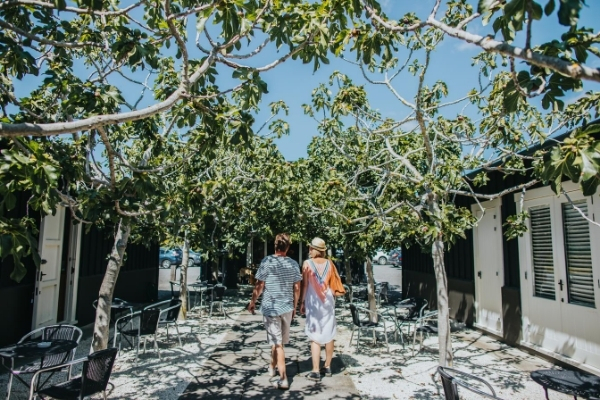 Over lunch at Black Barn Vineyards bistro, Kim Thorp recounts the 25-plus years that he and Andy Coltart have put into a business that is the essence of contemporary Hawke's Bay.

When they started, the business partners didn't event have a barn - black or otherwise. Now their vision is realised in a vineyard, wine exports, farmers' market, artisan food store, concert amphitheatre and events centre, and 17 luxury lodges (Benedict Cumberbatch and family hunkered down in one during lockdown).

Internationally successful as an ad-man and marketer, Thorp was born and raised in the Bay. He left to pursue his career but knew he would come home one day. When he did, a decade ago, Thorp realised something was missing: a generation. "We lost all those young people who left for education or work. Now they have come back and they're bringing the energy and skills that are powering the vineyards, breweries, restaurants and small businesses and bringing up their families here."

New businesses, such as Smith & Sheth, are building on the region's global reputation for wine. Steve Smith, Master of Wine and self-proclaimed 'eminence blanc et rouge' of Craggy Range, joined Texan venture-capital zillionaire Brian Sheth to buy premier vineyards in Central Otago, North Canterbury and the Bay, create the CRU brand and curate the Heretaunga Wine Studio in Havelock North. It raises the cellar door visit from, as CEO Michael Henley puts it, "standing at a bar while someone lectures you about wine", to an immersive theatrical and cultural experience. Beginning with waiata and telling the stories of the wines and their terroir on widescreen video, the studio elevates the experience of tasting the fine wine company's top-shelf products far above anything a connoisseur might appreciate in the Rhône or Napa Valleys.

Unlike most of the Kiwi travel experience, this is a province of lodges, B&Bs and boutique sleeperies. Jackie Black bounds up the path from her family's farmhouse to the two luxury glamping tents on their 26 hectare property.

The family has had years of pleasure on the hillside, which overlooks the winding, stony Tuktituki River valley and has views of Te Mata Peak. Across the river they've planted poplars and native trees that are bending in the morning breeze while tūī, pīwakawaka and dozens of other birds chirp and caw. Three years ago, they decided it was time to share what she calls "their special place" with anyone who wanted to visit. 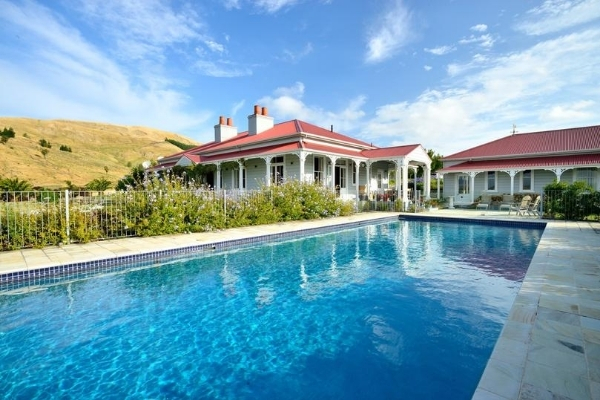 Some kilometres down a neighbouring valley, Kate and Cam McLeay are hosts at Cape South, a deceptively old-fashioned colonial homestead nestled in rolling hills cascading towards Waimarama Beach. Deceptively because the bones are the 1903 doctor's house from Waipawa village, 45km south, fleshed out with a stunning re-imagination of the villa style into a much larger, modern homestead.

It had been a B&B and a corporate and wedding venue but has gained a reputation as a party house. The owners contacted the McLeays in Uganda, where they were running a high-end lodge and Kate McLeay was also teaching at an international school, and asked them to take over the management of the property they call the Grand Old Duchess "because she speaks to you". Kate McLeay's message from the Duchess was to use the house to pursue her passion for wellness. For years she has studied yoga, meditation, mindfullness and holistic healing through massage and energy medicine; most of the food is plant-based and much of it is grown in the fields around the homestead.

The couple organise several weekend retreats each year and can facilitate bespoke retreats for groups of women, mixed workplaces or family groups, working alongside local practitioners across many therapies. "We're not wedded to one idea; the retreat can evolve," Kate says. "We want it to be a zone in which wellness comes in different forms." There's only one hard and fast rule: "We just want happiness in here."

While most of our regions have one "capital city", Hawke's Bay has two grown-up cities and a third large town within 20km. There's been rivalry between Napier, Hastings and Havelock North over the years. Napier is the glamorous Art Deco queen; Havelock North the slightly upper-crust country village; and Hastings has been the... well, hold that thought, because the largest of the trio is undergoing an exciting and invigorating makeover.

Hastings' centrepiece is Toitoi, the Hawke's Bay Opera House, a 1905 heritage gem that has been gorgeously revived over three years and several million ratepayer dollars. Walk in and you're transported back to Oscar Wilde style. The council has grafted on a functions centre and is renovating the neighbouring Municipal Buildings into a convention, community and retail space with Melbourne-style laneway. An unloved office building will find new life as a hotel. Manager of the opera house and arts precinct is Megan Peacock-Coyle, another Bay local lured back from Tauranga's Baycourt Arts Centre by the opportunity to lead a new-generation arts and community venue. "Toitoi will be the performing arts and events hub for Hastings," she says, pointing out that a key driver is community access and participation in performance, events and cultural activities. "This is going to create some amazing opportunities for cultural expression and pride."

Around the corner, the development merges into the renaissance of the city's once-dire main street as a mecca of artisan stores, eateries, taprooms, bakeries and cellar doors. 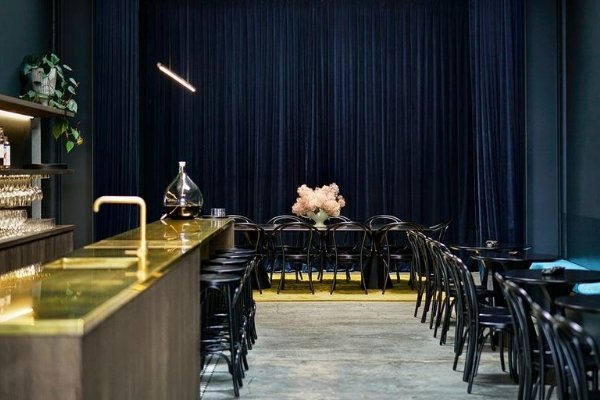 Kate Galloway and David Ramonteu have transformed a former bookstore in Hastings Distillers, New Zealand's first producer of certified-organic artisan spirits and liqueurs. It's a bit of a sidestep for a couple who've spent decades making wine (Galloway was head winemaker for Alpha Domus; Ramonteu grew up in a winemaking family in the south of France).

After selling their Alluviale and Dada wine brands, they took a break in 2015 and travelled to Europe with their children. That reignited their interest in distilling and they decided to use their winemaking skills to create unique spirits and liqueurs using organic and biodynamic ingredients.

"It was just a little side project that kind of went crazy," Galloway laughs, pouring her three signature gins in the elegant tasting room. "I've always loved smells. When I was a child I thought I'd make perfume," she says. "Our Albertine gin started off with 300 botanicals and I managed to whittle it down to 38 ingredients. It's very much like making a perfume, but you can drink it as well!" The couple's next ambition is to distill every part of the cocktails they serve. "We have made two parts of a negroni and we are working on the vermouth. Then we can say, 'We've made every part of this cocktail and we have grown most of the botanicals too.'"

Almost time to leave. David Brock picks me up in a 1939 Packard roadster, a vintage American saloon car that dates from Humphrey Bogart movies. Natty in his three-piece suit, bowler hat and two-tone shoes, "Brocky" is one of hundreds of volunteers for Napier's Art Deco Trust who show visitors around the world's most complete city built in the US architectural style after the devastating 1931 earthquake.

Outside the iconic Rothmans building, where Tony Bish now crafts genre-bending chardonnays, he parks up for a photo opportunity. We muse about the bravery of the Bay folk who rebuilt their shattered city and created a global treasure.

Ninety years on, Hawke's Bay is rebuilding itself after the challenges of the global pandemic. If history is any guide, it will pull through. Jackie Black was right: this is a special place, and we are lucky to share it. 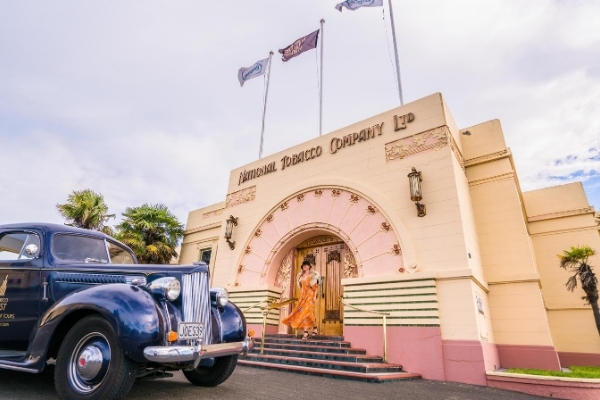 Black Barn Retreats
If it's good enough for Benedict Cumberbatch to shelter, then... The accommodation arm of Black Barn Vineyards has 17 unique luxury properties. Each is fully self-contained, in prime locations such as vineyards, oceanside or riverbank, furnished and decorated in original style, ranging from Summerlee (the eight-bedroom lodge where 'the thinking woman's crumpet' and his family spent lockdown) to Rush Cottage, a two-bedroom, turn-of-the-century cottage

Tuki Glamping
On an idyllic farm overlooking the Tukituki River, Jackie Black has pitched two glamping tents, one with a large covered deck and up-to-the-moment kitchen, although Black will cook and deliver evening meals. Yes, there are full bathroom facilities. The hills are alive with the sound of tūī, pīwakawaka, pheasant and quail, and if you feel like moving from this idyllic setting, the farm is only 15 minutes from vineyards, restaurants, beaches, and walking and cycle trails.

Toitoi - Hawke's Bay Arts & Events Centre
Toitoi has been a three-year project to restore Hastings' beautiful Opera House and graft a new function centre onto the historic 1905 theatre. Its dramatic ceiling echoes the underground river that flows beneath the building. Stage 2 sees the historic Municipal Building next door given a new life. As bad luck would have it, Toitoi opening in late February (just prior to lockdown), but there is a new programme of events.