Hawke’s Bay is gifted with dozens of safe, mostly flat trails for all types of fitness. The region's renowned cycling network covers nearly 200 kilometres between the Pacific Ocean and mountains.

From casual walkers to hard-core mountain bikers, there’s something for everyone. Here are just ten to try out.

One of the most famous cultural landmarks in the region, Te Mata Peak sits inside a 99-hectare park in Havelock North and stands nearly 400 metres above sea level.

The maunga and surrounding area are steeped in history, and the park was gifted in perpetuity to the community in 1927.

There are many trails for walkers and cyclists, including accessible options through native bush and towering California redwoods, and more challenging trails to the saddle lookout. The effort to reach the top is rewarded with stunning views across Hawke’s Bay and the Heretaunga Plains. 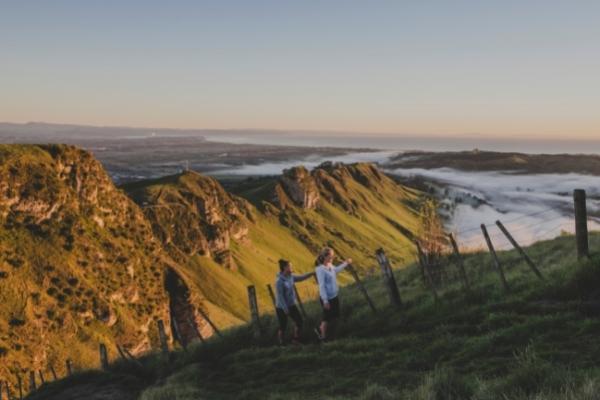 If you want some excellent views of the region, and you don’t mind working up a bit of a sweat, then a trip to the Longview Hut on the Kashmir Road tramping track could be for you.

At 1200 metres, it is situated above the bush edge, but below the ridge.

The advanced trail is a 2-3 hour (one-way) hike through the Ruahine Forest Park and provides access to the tussock-covered high country. The hut itself has 12 bunks and is first-come, first-served.

There are plenty of trails for all levels of fitness in and around the freshwater Lake Tūtira.

This popular fishing spot is also a bird sanctuary with an abundance of wildlife including black swans, white-face herons and fantails.

Shorter walks, including the 1km Waikopiro Loop and the 5km Tūtira Walkway, give amazing views across the lake and hill country to the Kaweka Range, while longer tramps include visits to the Table Mountain trig station. The tracks are closed for lambing in August and September. 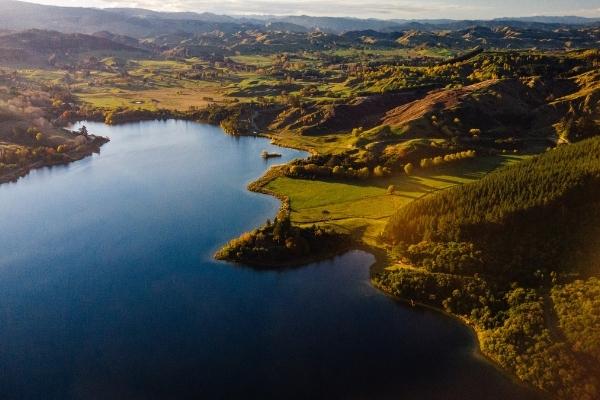 One of the region’s most popular tracks is the Sunrise. It’s a good one for families with children and new trampers.

The 5.2km trail snakes its way through changing forest types and offers some great views of Hawke’s Bay plains.

The Sunrise Hut is situated on the tops of the Ruahine Range and in a tussock basin beside the bush edge at 1280m.

As the name suggests, it’s a great place to watch the sun come up. Behind the hut is a 30-minute route where you can see Mt Ruapehu on a fine day.

Around a three-hour drive from Napier in Te Urewera is the large and deep Lake Waikaremoana – the North Island’s fourth-largest body of water.

An ancient petrified forest sits beneath the water’s surface and the lake is surrounded by one of the North Island's largest untouched native forests.

The 46km one-way Lake Waikaremoana Track is one of New Zealand’s most remote Great Walks. It’s a three- to four-day hike which follows the southern and western coast of the lake. Just a note though, currently the track and lake are both closed to the public, so this is one to look out for in the future. Due to open back up in mid-February 2022. 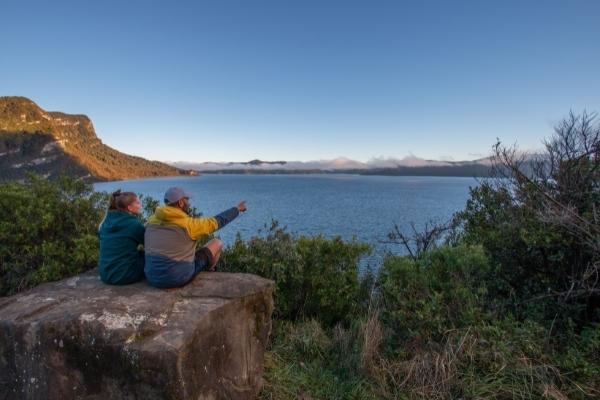 A must for both walkers and cyclists, these trails can be taken as leisurely as you like, or in the case of mountain bikers, as strenuously as you want.

The 60-kilometre trail along the Tukituki River is undergoing improvements, including the construction of a new 50m swing bridge. Running between Waipukurau and Waipawa, it offers a wide variety of sights as well as easy-riding and walking.

Make sure you get time to check out the 100m-long Tarewa Swing bridge, your Instagram feed will appreciate it. 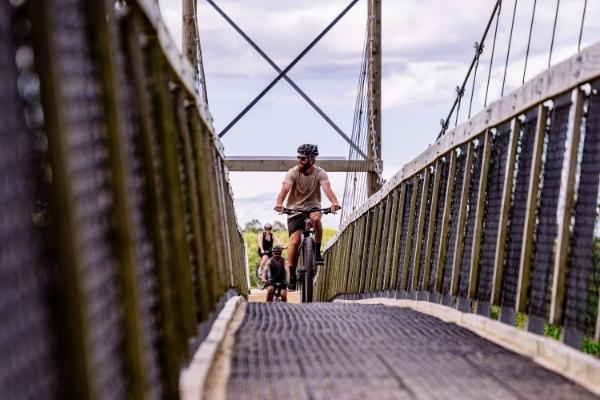 An easy ride for the family, the Water Ride is a 35km trail from seaside village Ahuriri in Napier, around the harbour, past the Hawke's Bay Airport and up towards Bayview.

Taking the inland trail, cyclists pass through wetlands, conservation land and a working farm. Keep an eye out for the likes of oystercatchers, white and grey heron, godwits, royal spoonbill, ducks and swans. Pitstops might include the Ōtātara Pā, Waiohiki Arts Village and Silky Oak Chocolates.

If 35km sounds a bit much, the ride can be broken down into easy sections. 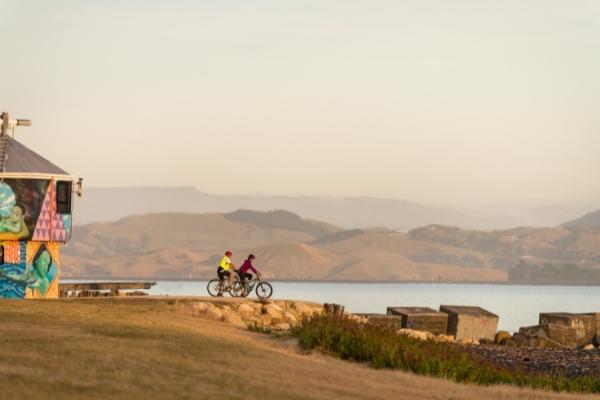 One for those who may be short on time but want to get the best the area has to offer, the Marine Parade Explorer (also part of the Water Ride) is a 15km gentle ride along the waterfront taking in Napier’s parks, gardens and kids’ activities.

At Waitangi Regional Park, have a stop at the Ātea a Rangi Star Compass and learn about how Māori navigators traversed the Pacific Ocean. Or, park up at Napier’s Ocean Spa, where you can soak in open-air pools and heated spas with waterfront views.

There are plenty of stops to grab some refreshments along the way. 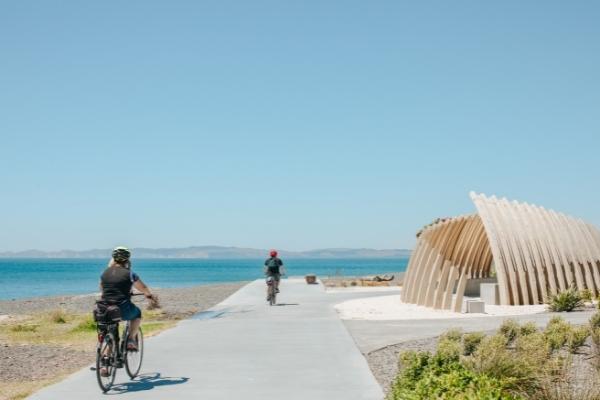 This mostly flat trail does exactly what it says on the tin – a ride through some of the country’s top vineyards.

Several routes on Hawke’s Bay Trail’s colour-coded network incorporate refreshment stops. You can choose to take the long leg from Clive at 60km or the shorter one from Roy’s Hill Reserve at 30km.

Either way, be prepared for some stops at cellar doors in the country’s oldest and second-largest wine region, including the likes of Stonecroft Wines, Alpha Domus and Black Estate. 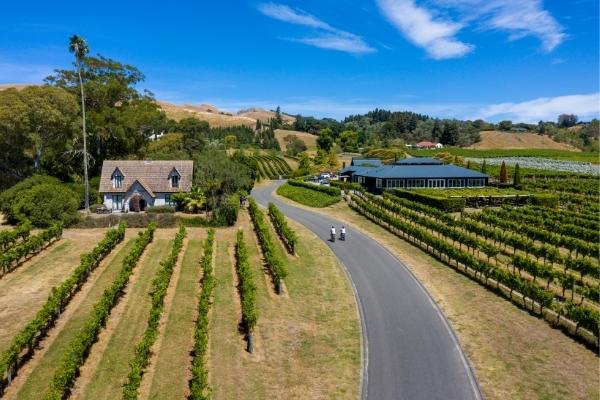 Lonely Planet singled out this loop as one of the best to try in the country, and it’s easy to see why.

The short 18km ride goes up one side of the Tutaekuri River from Taradale and back down the other, with majestic vistas of vineyards and farmland.

No visit is complete without a pitstop at the historic Puketapu Pub for a pub meal, beer and/or an ice-cream.

Air New Zealand operates daily non-stop flights to Napier from Auckland, Wellington and Christchurch, with connections across the domestic network.