Here's 7 of the region's most defining features.

Tucked away deep in Hawke's Bay’s Maungaharuru Ranges is one of our most incredible natural wonders - Bell Rock.

Forged over millions of years as the seafloor twisted and lifted, Bell Rock’s stunning rock formations are made up of sediment and seashells.

The walk to reach Bell Rock is an hour’s drive from Napier. It is another 1.5 hour walk (the full loop is three hours return) to reach the top, however the views are breath-taking.

Important to note that DOC says "extreme care" is required near the edge, and children must be supervised at all times. If you still have a little time left in your day, pop in to the Kiwi Crèche at Lake Opouahi. This 40ha kiwi sanctuary is surrounded by a 3.3km pest-proof fence and is beautifully serene. 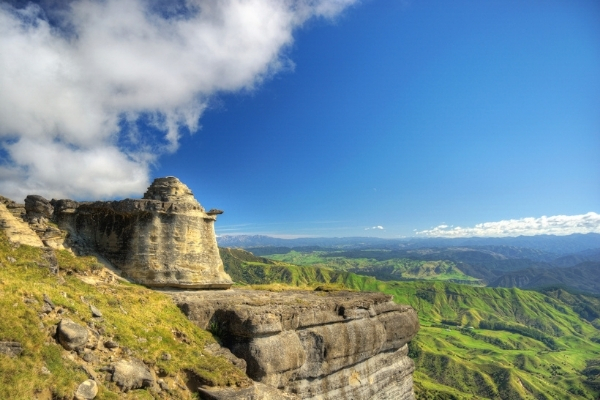 Te Mata Peak is one of the most loved and most visited places in Hawke’s Bay.

The whipped peaks of this natural wonder are a result of tectonic plates colliding, along a fault line that runs from Wellington through the Ruahine Ranges to Hawke's Bay.

Made of up fossil-rich limestone rocks, which were laid down more than 3.5 million years ago, Te Mata Peak tells an incredible story. Steeped in Māori mythology, Te Mata Peak is also home to billions of calcareous sea creature fossils that were embedded into the earth after their once submerged homeland rose from the ocean. Visitors can run, walk, mountain bike or drive to the top via Te Mata Peak Road, to enjoy spectacular views from the iconic peak. 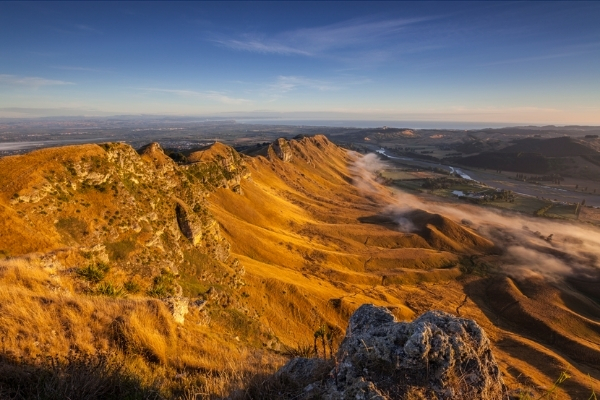 Legend says Lake Waikaremoana in Te Urerewa was created by a powerful Taniwha (water spirit), who carved out the lake bed as she struggled to escape her father's wrath.

Lake Waikaremoana is large and deep, plunging to depths of up to 256 meters. A petrified forest sits under the water, submerged as the lake filled up over a decade. Surrounding the lake is the North Island's largest untouched native forest, full of New Zealand wildlife. Roughly a three-hour drive from Napier, visitors can stay at the Lake Waikaremoana Holiday Park and explore the lakes wonders from there. 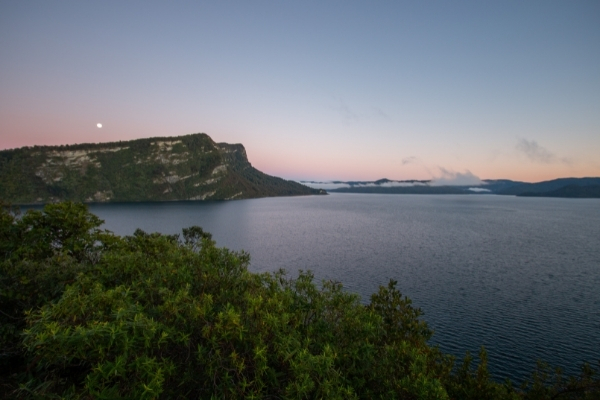 Shine Falls (along with Bell Rock) is a part of the Maungaharuru Range, which translates to 'the mountain that resounded' due to the musical bird population in the area.

In 1976 the Shine family gifted the region’s highest waterfall (58 meters tall), plus the surrounding land, to the Department of Conservation. Its popularity has skyrocketed ever since.

The Boundary Stream Scenic Reserve takes you through a rich native forest track. A 45-minute walk, it begins with lush countryside and large rock formations buried in the grasslands. Kākābeak grows on the cliffs, with the surrounding forest made up of kānuka, kawakawa, kōwhai and tītoki.  Take a picnic and your togs, as you’ll want to dwell on this natural wonder. 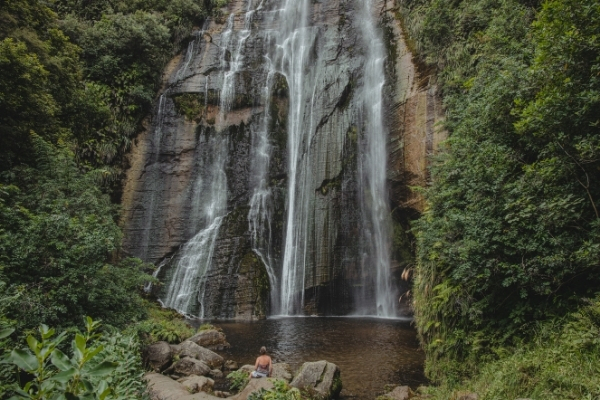 Located off the coast of Central Hawke's Bay in between Blackhead and Aramoana beaches, Te Angiangi is Hawke's Bay's largest marine reserve. The reserve is special in that it contains several marine habitat types, including a boulder bank area, rocky intertidal platforms and a sheltered bay that is perfect for learning to snorkel. Distinctive rock pool plants and animals include golden limpets, large beds of Neptune's necklace, pink coralline seaweed, eelgrass, small fish, crabs, juvenile paua and kina (sea urchins). An underwater wonderland! 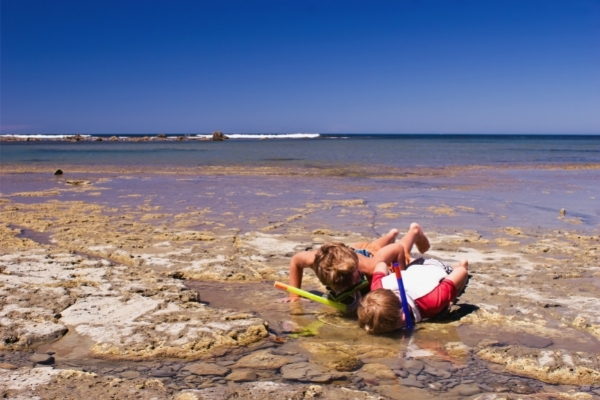 Rare in the world of hot springs, the Mōrere Springs produce 250,000 litres a day of hot sea water from ancient fault line.

While the name Mōrere only came into existence during the late 1890s, the springs have long been tapu to local Māori. The traditional name is ‘Ngā Waiariki o Ngāti Rakaipaaka’ (the hot springs of Ngāti Rakaipaaka), or ‘the healing waters’.

For many years, Māori utilised the hot springs for cooking, but since 1885 this practice was stopped, and the area is now a thermal reserve. High rainfall, a mild climate and fertile mudstone soils have created the environment for a notable area of pristine rainforest, best known for the nīkau palms. The reserve is home to a wide variety of indigenous trees and birdlife including tūī, bellbird, kererū and shining cuckoo. 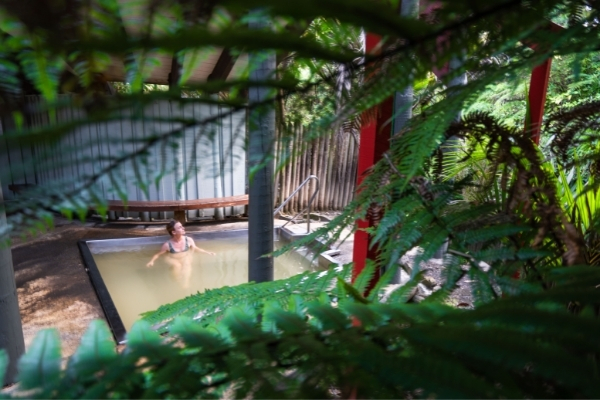 Cape Kidnappers / Te Kauwae-a-Māui is a sacred (tapu) site, and in Māori legend, it represents the fishhook of Māui that he used to pull the North Island / Te-Ika-a-Māui out of the sea.

The geological history of the Cape Kidnappers cliffs goes back five million years to a time when the land was at the bottom of the sea. Occasionally fossilised whale bones and shark’s teeth are found in some of the oldest rocks situated below the Cape itself. At the top of the peninsula, which protrudes into the Pacific Ocean, the world's largest, most accessible mainland gannet colony is a hive of activity from September to April. In September, the gannets return from their winter escape to build nests ready for the arrival of chicks during December and January. See Gannet Safaris Overland for information on gannet tours in Hawke's Bay. 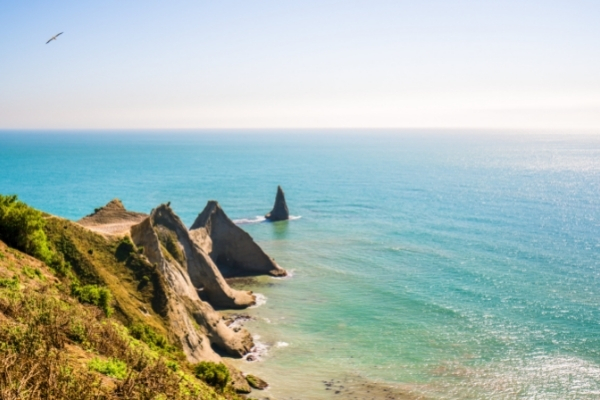 It's a tough job choosing just seven, so here's some more iconic Hawke's Bay natural wonders that we had to highlight: