Ahead of Matariki, Sarah Pollock takes a traditional journey around the Milky Way at Napier's Ātea a Rangi star compass.

Long exposure taken of the sunset at Ātea A Rangi, the Celestial Compass.

It's 6.05 am on Friday morning when we turn off State Highway 51 in Napier and follow the blink-and-you'll-miss-it sign for Waitangi Regional Park.

Standing outside the car, in a small gravel parking lot, we gaze silently at the sky, an inky expanse, speckled with stars and smudged pink as it stretches to the horizon. To us, the stars are simply ornamental; tiny lights that decorate the sky.

To people like Piripi Smith, one of Aotearoa's few traditional navigators, these celestial bodies hold important stories, which have guided voyagers around the Pacific for centuries.

After a few minutes of waiting in the dawn chill, we hear the crunch of bike wheels on gravel as Smith arrives with his wife, Michelle, and two children, Tainga, 12, and 8-year-old Mārere in tow.

Following handshakes, hongi and a karanga, Smith asks how much we know about celestial navigation. After confirming our cluelessness, he starts recounting its long and controversial history.

"In the past 4000-5000 years we've lost the practice of whakatere waka, of navigating sailing by the stars," Smith explains. As technology advanced, the techniques that helped people travel between tiny islands in the vast Pacific without so much as a map didn't just seem unnecessary but impossible.

"In the 1950s and 60s you had a few people that were quite condescending towards Pacific Islanders and Māori," Smith says, referencing New Zealand historian Andrew Sharp, who wrote a book called Accidental Voyagers In the Pacific. 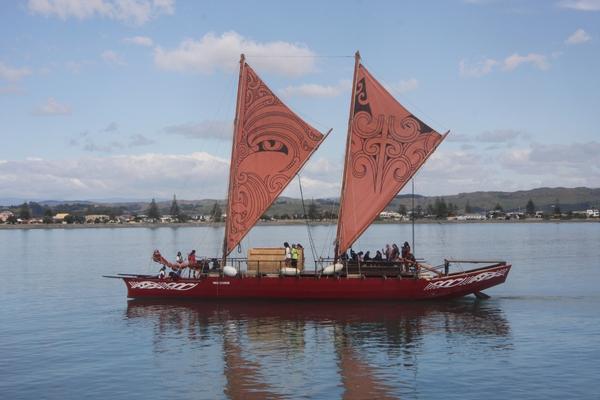 Te Matau a Maui, one of New Zealand's large voyaging waka based at Ahuriri in Napier.

In it, Sharp claimed with typical Western condescension that Polynesians lacked the intellectual know-how and equipment to have voyaged intentionally. Instead, he believed, they ended up on islands by chance. A theory that has since been thoroughly critiqued.

So, in 1973, a group created the Polynesian Voyaging Society, built a fibreglass voyaging waka and planned to sail to Tahiti to prove it could be done. The issue was that only a few people across the Pacific still held the navigational knowledge.

Mau Piailug, a man from the Caroline Islands known as the "grandmaster navigator", was one such person.

"He agreed to teach the Tahitians and teach others," Smith says, including Hekenukumai Busby and Jack Thatcher; two of Aotearoa's most renowned celestial navigators and Smith's mentors.

"If it wasn't for Mau Piailug we wouldn't have got that taonga back. Now we do have it back, we want to make sure we don't lose it again."

Ātea a Rangi, a giant celestial compass in Napier's Waitangi Regional Park, is one way Smith intends to do that.

Set between the state highway and the coastline, the compass is made of 32 wooden pou that stand up to 3.5m high in a 30m circle. Modelled after a traditional star compass, each pou represents a point on the horizon where celestial bodies rise and set and comes with a unique mythological kōrero. 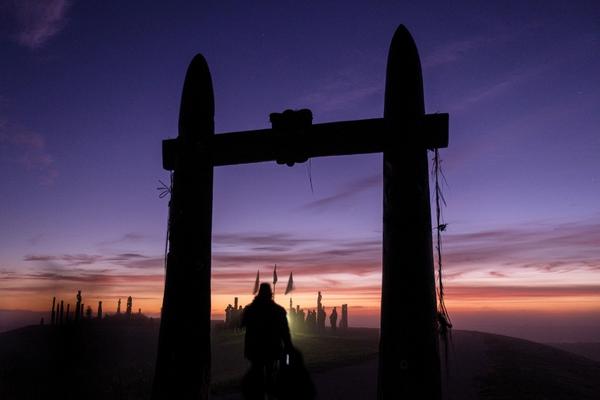 The compass is situated right on the east coast with sweeping views of the ocean horizon.

The compass was opened in 2017 as part of a larger project to restore mana to Waitangi Regional Park. As the landing point of Takitimu waka for Ngāti Kahungunu, and where Māori and Europeans first lived together in the area, the land was rich with significance, but over time this had been forgotten and the land was trashed.

"It was the biggest illegal rubbish dump in Hawke's Bay," Smith says. "You'd come down here and there would be burned-out cars and old couches and it was affecting the land and water."

When Smith's kaumatua said it was time for him to teach, he knew he needed something like Ātea a Rangi. After walking to Waitangi Regional Park one morning, he knew this spot, right on the coast with a clear view of the horizon, was perfect. 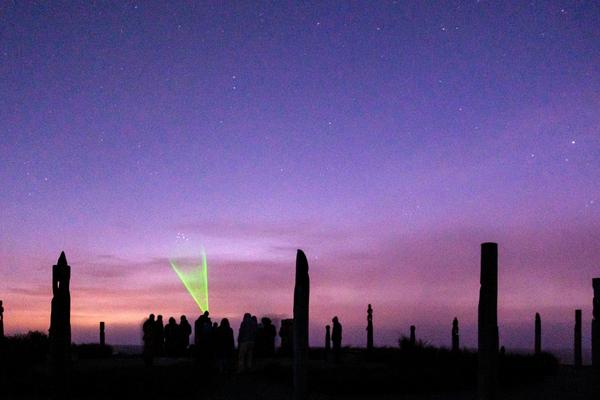 Piripi Smith said the coastal spot was perfect for the compass.

In 2016 the land was slowly cleaned up and replanted with native bush. After Smith partnered with the regional council and received funding, construction for the compass began.

The collaboration with the council wasn't without quirks. Before creating the compass, Smith knew it had to be built using the very techniques it would teach prospective navigators.

For months, Smith marked up the site during various times of the day and night. When the council sent an engineer down to the site, they couldn't believe Smith hadn't used any tools or devices. 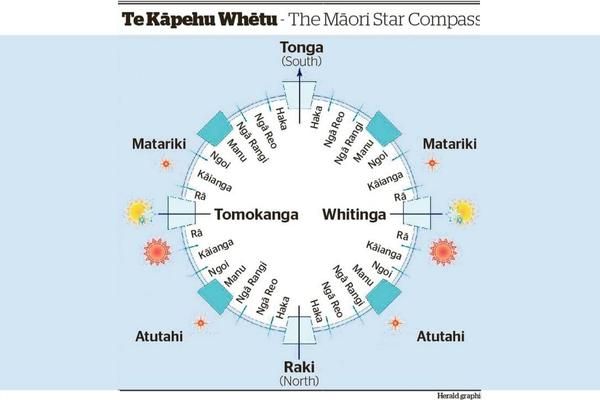 Te Kāpehu Whētu, the Maori star compass, divides the 360 degrees around a waka in the open ocean into different whare (houses). Graphic / NZHerald

"The council person asked how I did it and I just said 'with my eyes'," Smith says with a grin. Unsatisfied, they hired a consultant engineer to check it but they discovered all points were perfectly placed. "I think one point was like 10mm out," he concedes.

Smith, wife Michelle and local carvers Phil Belcher and Nathan Foote then formally founded the Ātea a Rangi Educational Trust, which manages the compass and trains the next generation of navigators.

"Understanding it in here makes it easier to understand out in the water," Smith says of the life-sized compass.

Four people have already been trained, including two Tahitians whose graduation test was to sail from Rarotonga to Aotearoa on a large voyaging waka, of which there are 14 in the Pacific and five in Aotearoa, one in Ahuriri.

After starting to sail in 2005, and training in 2010, Smith's final test back then had been a little harder; he had to direct a waka from Aotearoa to Rapanui (Easter Island).

"It's the most bloody remote piece of land in the whole area," Smith says, with exasperation. "I was like 'thanks Boss'."

Walking towards the compass, we pass several informational signs, which indicate the other way the space is used: educating and inspiring tamariki. Over the years many children from pre-school to tertiary have come to learn about astrology and te ao Māori.

"Every culture has a different kōrero about how the heavens were made," Smith says.

"This is the more western way of seeing how things happen," he said, gesturing to a sign with a scientific diagram of the Earth and the sun.

"But our tūpuna saw it in a different way," he says, shepherding us into the compass. Over the next hour, we learn this other, rich and meaningful way.

There's the pou carved in the shape of a voluptuous woman, known as Hineraumati, the sun's "summer maiden" which is positioned in line with where the sun rises and sets during summer.

On the opposite side of the circle stands Hinetakurua, the "winter maiden"; the two figures indicate the way the sun "travels" between two points on the horizon between seasons.

There's Kāinga, the whare the constellation of Matariki sits in. "They're called whare or houses because the stars live in them," Smith says. It's a tender personification that brings to life a topic so often rendered in sterile angles and exact numbers.

Walking anti-clockwise around the compass as the sun drifts up from the horizon, I'm struck by the richness of it all. The way every detail, whether on a carving or in a story represents something that represents something; all of it pointing both up towards the heavens and back through generations. 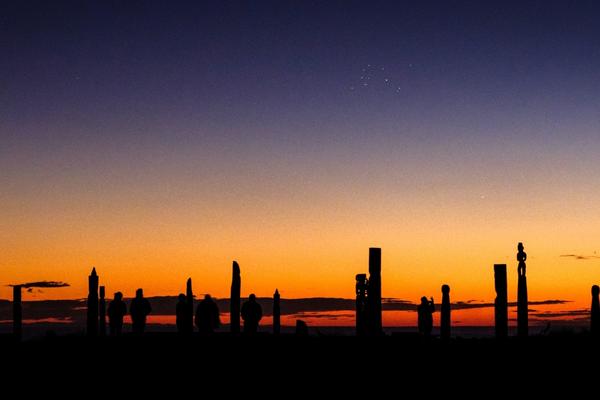 Unsurprisingly, this is why, despite the advances in navigational technology, Smith remains drawn to the traditional practices.

"I think it's the same as why people might do kapa haka or different forms of art, it gives you a real link to your tipuna, ancestors," he says, looking out to the lightening skyline.

"You're teaching things that have been taught for thousands of years and understanding them."

It isn't easy, he adds. "You have to go through a lot of hardship, it's real character building but I noticed that in myself, it changed me as a person and I've seen it have a positive effect, especially for youth."

Teaching has had a deep impact on Smith's life.

"Once you are in that place of teaching, you become a link in a chain that has gone for thousands of years and you get to pass it on. That feels really important when you're doing that."