Ralph Fiennes and Jessica Chastain headline a star cast dealing with the fallout from a debauched weekend in Morocco in John Michael McDonagh’s blackly comic skewering of privilege.

“Based on a 2012 Lawrence Osborne novel that might well have been set (with only small changes) many decades earlier, John Michael McDonagh’s The Forgiven watches rich Westerners treat Morocco like their playground, scarcely noticing the poverty and disapproval surrounding their opulent parties. Imperialist-grade entitlement goes only so far in the modern world, though, and when one partyer accidentally kills a local teen, some kind of accommodation is going to have to be made. Scripted, directed and acted with intelligence and panache, it’s a very grown-up film but never a bore, a morally alert drama that leaves the scolding to us.” — John Defore, Hollywood Reporter

“Jessica Chastain and Ralph Fiennes lead a stellar ensemble cast in this wild foray into opulence, sin, and reckoning set deep in the Moroccan desert… McDonagh applies a Felliniesque lens towards the bourgeoisie, showing how their vapid pursuits prey on (or ignore) the livelihoods of others, sometimes with deadly results. The shimmer of these events, contrasted with the bleakness of the working class and Moroccan help who observe from the periphery, allows McDonagh to explore fatalistic themes of hedonism, neocolonialism, and the negligence of privilege.” — Toronto International Film Festival 2021. 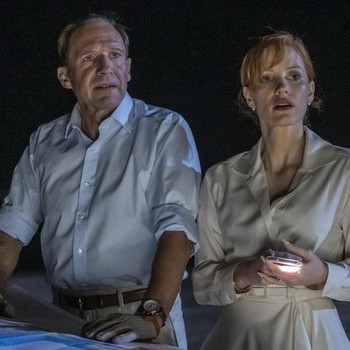