Marie Kreutzer’s bold and subversive costume drama features an imperious Vicky Krieps as the restless Empress Elisabeth of Austria, struggling to break free from the restrictive confines of courtly life.

“Phantom Thread star Vicky Krieps puts in a terrific performance as Empress Elisabeth of Austria, who is turning 40. In the Vienna of 1877, that’s basically considered over the hill. Famed for her beauty and figure, she instructs her staff to lace her bodice – or ‘corsage’ – ever tighter as gossips whisper that she’s put on weight. Writer-director Marie Kreutzer explores the contrast between her ceremonial public image and her personal desires in a film that would make a good companion piece to the recent Diana film Spencer.

This is a woman who is restrained not just by her clothing, but by the expectations of society. She has a complicated relationship with her husband, Emperor Franz Joseph (Florian Teichtmeister), but enjoys flirtations with several men as she travels to England and Bavaria. She visits hospitals in her finery, dispensing beautifully wrapped perfumed sweets to patients. As she watches a woman chained up and screaming, presumed mad, you can’t help wondering if Elisabeth might have been in that position herself, were it not for the accident of her noble birth…

The Favourite and Marie Antoinette also spring to mind when watching this formally unconventional story of an unhappy royal. But Kreutzer has her own style of revisionist feminist history, and aided by Krieps’ bold and brilliant turn, it’s riveting stuff.” — Anna Smith, Time Out. 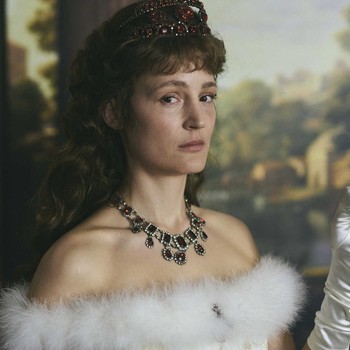