Belgian director Lukas Dhont follows up his award-winning debut Girl (NZIFF 2018) with this deft exploration of the fragile world of childhood bonds, which has already picked up major prizes at Cannes and Sydney.

Inspired by his own childhood and teenage friendships, Lukas Dhont explores the fragility of adolescent bonds between two best friends in this intimate and heartrending drama that followed its Cannes 2022 Grand Prix award (shared with Stars at Noon, also featuring in our programme) with Best Film at the Sydney Film Festival 2022.

On a bright summer’s day, 13-year-old Léo and Rémi run wild in the floral wonderland of Léo’s family farm. Hunting imaginary foes or chasing each other, dashing around on their bikes or discussing their hopes and dreams during sleepovers, they share an untroubled closeness and are rarely out of each other’s company. When they start secondary school after the summer holidays, this intense bond and the boys’ affectionate interaction doesn’t go unnoticed by their classmates, who are curious as to whether these newcomers are ‘together’. The anxiety this unwanted attention generates leads Léo to pursue activities that exclude Rémi, who grapples to understand his friend slowly pulling away, and the unbearable severing of their relationship. — Sandra Reid

“The combination of knock out performances, in particular from newcomer Eden Dambrine as Léo, and direction of uncommon sensitivity from Dhont makes for a picture which is intimate in scope but which packs a considerable emotional wallop.” — Wendy Ide, Screendaily 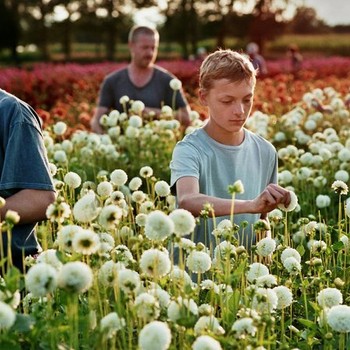