Enjoy the latest film by social satirist supreme Ruben Östlund – his fourth title to play in NZIFF, and the second to have won the Palme d’Or.

After skewering the contemporary art world in The Square (NZIFF 2017), the Swedish director focuses his excoriating gaze on fashion, influencers and the ultra-rich in his English-language debut. Outrageously entertaining and unapologetically in-your-face, Triangle of Sadness divided critics and audiences at its Cannes world premiere but left no one indifferent.

This frontal assault on the superficiality of current times, capitalism, class, masculine insecurity, coupledom, social media and a whole lot else besides, roundly compensates for its lack of subtlety by its uproarious panache and shrewd underlying commentary, taking excruciating comedy to new heights.

Yaya and Carl, surface-beautiful and deeply shallow, are models – when they can get a gig. In the absence of catwalk strutting, Yaya constantly maintains her Instagram profile while Carl frets about the imbalance in their relationship – she earns more than he does, but she never picks up the swank restaurant tab. Are they a couple or just performing so as to boost the number of ‘likes’ from their social media followers? Bickering doesn’t sort anything out, but fortunately Yaya is offered a free trip on a super yacht. They may be the poorest among its grotesquely rich denizens, but unexpected circumstances mean Carl’s ‘hotness’ factor will become more valuable than any other wares that can be traded. — Sandra Reid

“Östlund’s wickedly funny English-language follow-up to The Square features none of the same characters as his 2017 Palme d’Or winner but employs much the same tactic of creating deeply uncomfortable situations for people more than comfortable with their privilege. It’s a Buñuelian strategy, à la The Discreet Charm of the Bourgeoisie, of which Östlund has become art cinema’s foremost practitioner. His operating theory here, floated amid arguments about capitalism and Karl Marx, is that beauty itself is a form of currency, albeit an incredibly volatile and fickle one, like crypto, that can crash at any time… Östlund makes you laugh, but he also makes you think. There’s a meticulous precision to the way he constructs, blocks and executes scenes – a kind of agonizing unease, amplified by awkward silences or an unwelcome fly buzzing between characters struggling to communicate. First The Square, then Triangle. No matter what sphere he tackles, we’re bound to see the world differently.” — Peter Debruge, Variety 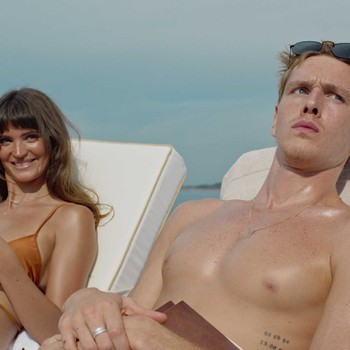