Whānau Mārama: NZ Int.Film Festival; Both Sides of the Blade

Whānau Mārama: NZ Int.Film Festival; Both Sides of the Blade

“Claire Denis delivers an understated yet psychologically vivid romantic drama, co-written with her Let the Sunshine In collaborator Christine Angot. On her way to work one day, Sara (Juliette Binoche) spies her ex-lover François (Grégoire Colin) outside of the metro; shortly thereafter, by a seeming coincidence, François gets in touch with Jean (Vincent Lindon), his old friend – and Sara’s husband – to propose they go into business together on a new venture. François’s unexpected re-emergence in their lives, and the emotional destabilization that comes with it, propel this finely wrought and melancholic narrative, with Denis’ characteristic knack for capturing the intimate sensuality of everyday life on full display, bolstered by a typically gorgeous score from regular collaborators Tindersticks.” — Rendez-Vous with French Cinema 2022

“Denis’ smart, moody, superbly acted melodrama… begins with a rapturous vacation interlude, with the central couple draped in one another’s arms in the sea as the sweet melodic notes of Tindersticks’ score wash over them… The ecstasy of the establishing scenes makes the raw, wrenching volatility of later developments, when the past cuts through like a knife to shatter the couple’s harmony, more powerful.” — David Rooney, Hollywood Reporter 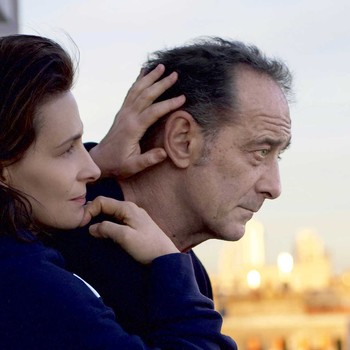