Under The Bleedin' Radar , and 95bFM (in the extended Auckland area) are chuffed to present the return of The Schizophonics.

In May, The Schizophonics blew minds everywhere on their first visit to NZ and Australia. Antipodean audiences had seldom (if at all) witnessed the likes of levitational front man Pat Beers, whose sweaty splits, 720 degree spins (all before completion of the first song!) had local audiences gagging!! The Schizophonics combine the swagger of James Brown meeting the Stooges, Hendrix and MC5's sonic attack in their hooky garage pop.

The Schizophonics almost brought Auckland's K- Road to a standstill with a guerilla performance you can see at the Under The Radar website.

San Diego's wild trio is now 2/3's Californian (with husband and wife Pat and Lety), and 1/3 kiwi with the addition of Takumi MacIntyre (formerly of the Cavemen) on bass. So impressed with Takumi's style and grace when they met him in May, Pat and Lety offered him the gig before even seeing him play a note! Takumi just completed a 30+ date tour of the USA with the band.

Their new album is called People in The Sky, you can hear it on YouTube.
Earlybird tickets available from Under the Radar for all (mostly!) shows before Christmas Day. 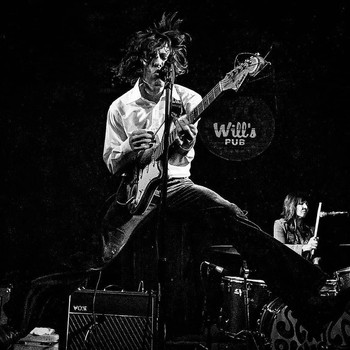 Buy Tickets
Schizophonics Under The Bleedin' Radar , and 95bFM (in the extended Auckland area) are chuffed to present the return of The Schizophonics.