Fran Kranz’s highly accomplished debut feature takes an unflinching look at the endemic horror of school shootings in America and their lingering scars, through the eyes of the parents of the perpetrator and his victim.

"In a small American town, church parish workers nervously prepare for a meeting in the antechamber, a mediator ensuring the space will be neutral and non-triggering for the four participants.

Gail (Martha Plimpton) and Jay (Jason Isaacs), visibly tense arriving at the church, are soon joined by Richard (Reed Birney) and Linda (Ann Dowd). As the two couples awkwardly sit across from each other in this room, they try to process the unspeakable act of violence that tore all their lives apart: Richard and Linda’s son killing Gail and Jay’s.

Veteran actor Fran Kranz (Dollhouse, Cabin in the Woods), in his directorial debut, delivers a stunning chamber piece that takes its time to build to climax, and provides no easy answer to the difficult conversations it raises. Namely, to the epidemic of gun violence in America.

The powerhouse ensemble cast provide nuanced and affecting performances as grieving, broken parents who lost their sons to senseless violence and desperately want this process to help them move on. Kranz and the cast never let the tension tip over to melodrama, making the challenging content and eventual catharsis between the characters all the more devastating. — Vicci Ho

“The movie announces Fran Kranz as a bold new filmmaker who has earned the right to excavate a subject as sensitive as this one.” — Owen Gleiberman, Variety

“It’s an airless chamber piece, a self-assured gamble that pays off almost instantaneously thanks to the four impeccable performances at its centre.” — Benjamin Lee, The Guardian" 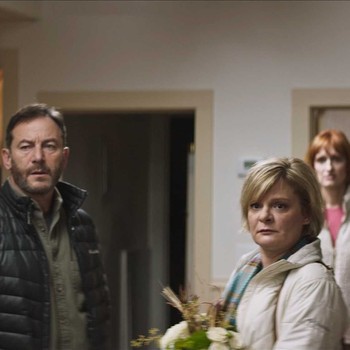 Buy Tickets
NZIFF: Mass Fran Kranz’s highly accomplished debut feature takes an unflinching look at the endemic horror of school shootings in America and their lingering scars, through the eyes of the parents of the perpetrator and his victim.