Two strangers explore the pleasures and pitfalls of platonic friendship while bonding over online Spanish lessons in this intimate, expressive drama shot during lockdown over video-chat calls.

"A gentle relationship study playing out entirely through the cramped, sterile rectangles of a virtual chat app, actor-director Natalie Morales’ freshman feature Language Lessons... [is a] tender, slender story of a queer California widower (Mark Duplass) processing his grief through online Spanish classes with a Costa Rican stranger (Morales)… Language Lessons is plainly a feat of quarantine-era production, with its two-actor, two-location, two-screen setup making it pretty much a model of what can be accomplished in lockdown conditions...

As Adam [Duplass] spirals through grief in its various pained stages, he and Cariño [Morales] converse both directly and by exchanging bilingual video messages, like 21st century penpals. While he treats her alternately as a friend, therapist and impartial sounding-board – initially oblivious to what crises she may be juggling in her own life – she flip-flops over just how much of this emotional labor she’s willing to share...

Films explicitly about the formation of friendships are rare, and Morales and Duplass have fashioned rather a perceptive one, adapting the push-pull dynamics of a romantic comedy to more delicate psychological terrain.

... It’s the amiable, spontaneous rapport between the two actor-writers that... lends ballast to [the film]... Large corners of backstory remain unpainted on both sides... which seems less a failure of writing than an acknowledgement of how much life is lived... beyond the scope of the webcam.” — Guy Lodge, Variety" 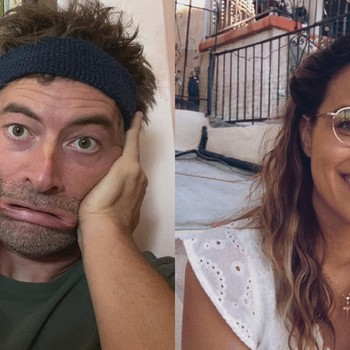