"In a deal to secure research funds, archaeologist Alma (Maren Eggert) reluctantly agrees to test-run humanoid love robot Tom (Dan Stevens), who has been tailored to her particular taste. The arrangements are made: Tom, who is still in development, will live with Alma for three weeks, during which she is tasked with taking him for a spin as her romantic partner. Alma, ever the cynic, is not enthused, but grins and bears the experiment for the sake of her studies. What ensues is a funny, poignant exploration of compatibility, trust and desire.

It’s a classic romance premise of opposites – Alma has spent her life studying antiquities and here she is dating a robot – yet the film goes further, questioning the nature of traditional relationships, highlighting how those who fail to partner up by a certain age are often cast aside.

Written and directed by Maria Schrader, who most recently directed Netflix miniseries Unorthodox, the film tactfully juggles its romantic through-line with a multitude of subplots: Alma’s strained relationship with her colleague-and-ex, her caretaking responsibilities for her ailing father struggling with late-stage dementia and her ground-breaking research into the Sumerian cuneiform writing system.

The film is never overly futuristic, the existence of a humanoid love robot and a handful of holograms the only real difference from our present day. Maren Eggert (Tatort) is riveting as the highly-strung Alma and Dan Stevens (Downton Abbey) is brilliant as perfection-in-beta-mode Tom, the chemistry between the two particularly striking in the film’s final sequence. — Amanda Jane Robinson" 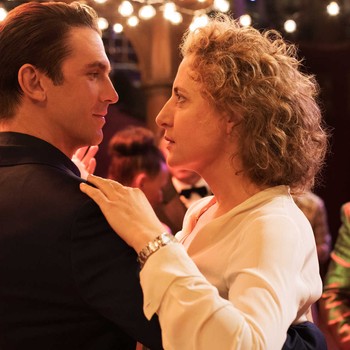