A portrait of the British artist LS Lowry and the relationship with his mother, who tries to dissuade him from pursuing his passion.

'Vanessa Redgrave gives a shrewd and amusingly bleak performance here as Elizabeth Lowry, the cantankerous and bedridden mother of the artist LS Lowry – played by Timothy Spall. It’s a small-scale theatrical chamber piece, directed by Adrian Noble and written for the screen by Martyn Hesford, depicting Lowry’s life in the Lancashire town of Pendlebury in the 1930s, when he lived at home, caring for his widowed mother, devoted, lonely.

He is exasperated by her imperious mood swings, her refusal to take his art seriously and then by her capricious decision to like some of his work – a sudden spasm of approval that is no less disconcerting than her contempt. Through it all is Elizabeth’s deadpan gloom: Lowry patiently asks her to be cheerful and she replies acidly: “I haven’t been cheerful since 1898.” Lowry himself is shown living a musingly melancholy and apparently asexual existence that comes alive with this verbal sparring with his grumpy old mum, and with hints that the impossibly exotic London art world might just be starting to appreciate him.

It’s a movie that reminded me of Samuel Beckett – Happy Days or Endgame, perhaps – or maybe Alan Bennett, though if Bennett had been writing this, I suspect he would have given greater weight to Lowry’s wryly fatalistic sense of humour. Hesford makes him a serious, stoic figure (certainly more subdued than Spall’s other great artist, JMW Turner in Mike Leigh’s Mr Turner). But it’s a sympathetic portrayal, and not without funny moments. Lowry threatens one night to pile up all his paintings in the back garden and burn them; the next morning, Mrs Lowry asks him if he has done so and her son sheepishly replies: “No, I didn’t want to ruin Mrs Stanhope’s washing.” (It calls to mind the moment when David Hockney brought his mother to visit California and she is said to have commented: “All this lovely weather and no one’s got any washing out!”) An entertaining showcase for two first-class performers.' - Peter Bradshaw, The Guardian. 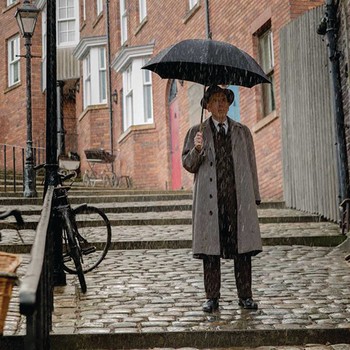