Heavenly Light - a concert by the Waiapu Cathedral Choir

Heavenly Light - a concert by the Waiapu Cathedral Choir

The programme of our Heavenly Light concert features music illustrating the theme of light brightening the darkness, both literally and figuratively, and includes music composed in every era from the 16th Century to the modern day.

Choir Director Anthony Tattersall will open the concert with Charles Wood’s magnificent anthem for double choir Hail, gladdening light, setting the scene for the rest of the programme. O nata lux de lumine (O light born of light), a 10th century hymn set to music by the 16th century English composer Thomas Tallis, and the beautiful Lux Aurumque by contemporary American composer Eric Whitacre give a different mood, with ethereal harmonies . A selection of carols include In the Bleak Midwinter, named the worlds’ best Christmas carol by some of the world's leading choral experts in 2008, John Rutter’s lovely Candlelight Carol, and The Three Kings by the German composer Peter Cornelius. Choruses from some longer works are also included in the programme. Amongst these are The Heavens are Telling from Haydn’s masterful Oratorio The Creation, and the Lux Aeterna from John Rutter’s Requiem. Well-known Hawke’s Bay bass soloist Richard Harris is a member of the Cathedral Choir and he will sing the solo aria The People that Walked inDarkness from Handel’s famous Messiah.

The children’s choir at the Cathedral was established in 2019 and has already participated in several concerts and services, including the 2019 Christmas ones. The group will sing two of their favourite songs: Close every door to me and Light a candle in the window.

William H Harris is best known today for two anthems for unaccompanied double choir, one of which will be performed in this concert. This is Faire is the heaven, a complex and beautiful setting of a poem by Edmund Spenser. And a fitting finale will be Charles Wood’s great anthem O thou the central Orb. In the wonderful acoustic of the cathedral, this should send both choir and audience home smiling! 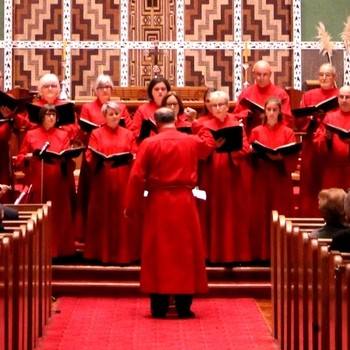 Heavenly Light - a concert by the Waiapu Cathedral Choir The programme of our Heavenly Light concert features music illustrating the theme of light brightening the darkness, both literally and figuratively, and includes music composed in every era from the 16th Century to the modern day.