Marianne (Binoche), a writer posing as a cash-strapped divorcée who needs work, is hired as a cabin cleaner on a ferry boat at the port of Ouistreham which serves the city of Caen. Marianne’s disquiet grows as she forms a tight bond with her co-workers, all the while secretly taking notes on them. She then faces the awful situation of having to confess to her new friends that she has been using their life stories as raw material for her book.

Juliette Binoche shines in the lead role but the film is stolen by the non-professional actors who form the rest of the cast, led by the sincere and realistic performance of Hélène Lambert. This brave choice by Director Emmanuel Carrère accentuates the documentary aspects of the film and brings with it a welcome humanity. With generosity and humour, they embody the shadow workers despised by society.

Opening the Quinzaine des Réalisateurs at the Cannes Festival 2021, Between Two Worlds invites us to reflect on the ethics of character, trust, friendship and journalistic practice. 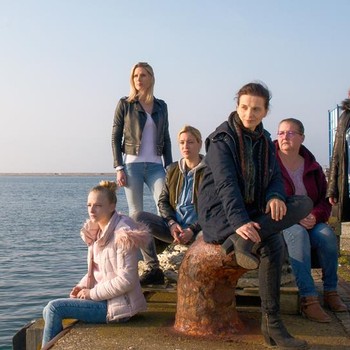