Before Summer F.A.W.C! officially turns 10 years old, we pause and honour the people who have helped shape Hawke’s Bay into the culinary destination that it is today.

From the boutique producers of the Wairoa District and the decadent dining of Napier City, to the produce powerhouse that is Hastings District and the prime farmlands of Central Hawke’s Bay, it’s the talented people behind the food and drink that we all enjoy who are leading the way. And tonight we honour them!

Cuisine Magazine editor Kelli Brett will be in house to lead the discussion and announce the very first inductee to the F.A.W.C! Hall of Fame.

This event has 150 tickets available.

F.A.W.C! Food and Wine Classic has new dates but the same plan – to celebrate 10 years of the Hawke’s Bay’s signature culinary festival with incredible wine, fantastic entertainment and some of the best chefs Hawke’s Bay and New Zealand can serve up.

While Covid-19 forced the festival to postpone to our new dates of January 28 – February 6, the majority of F.A.W.C! events have come along for the ride. The Hawke’s Bay’s culinary tastemakers have delivered a dazzling line up of events, including a new signature showcase luncheon that will act as a cornerstone of the Summer Series for years to come.

The entire 10-day festival will be a stunning display of the very best of Food and Wine Country as the region’s finest chefs, winemakers, artisans and purveyors work alongside incredible visiting talent. And with a programme this F.A.W.C!ing good, the hardest part will be deciding which events to leave off your itinerary 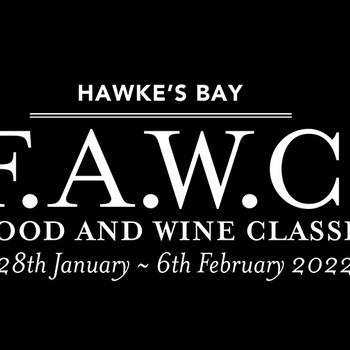 Buy Tickets
F.A.W.C! Hawke's Bay Legends with Cuisine Magazine Before Summer F.A.W.C! officially turns 10 years old, we pause and honour the people who have helped shape Hawke’s Bay into the culinary destination that it is today.