Drax Project has announced a return to Blackbarn Vineyards in Havelock North on Saturday March 14, 2020.

Presented by ZM and Eccles Entertainment, this will be an all-ages event and follows on from a sold-out epic summer performance at the vineyard earlier this year. Foley joins Drax Project on this show as their special guest.

"We'd never played Hawkes Bay before this summer. We'd obviously heard good things, but were totally blown away by the beauty of the region and the response we got from people! It was a real highlight for us! We've got some making up to do for not visiting sooner, so couldn't leave it until next summer to come back!" - Drax Project.

After a whirlwind few years, which has taken their music to the top of the charts and around the globe, Drax Project are without question, one of the hottest tickets in music right now.

Their recently-released self-titled debut album has dominated the airwaves and Spotify, with smash hits such as ‘Woke Up Late’ feat Hailee Steinfeld; ‘Catching Feelings’ feat. SIX60; ‘All This Time’ and ‘Toto’.

Foley are a fresh new face on the NZ pop scene, already with radio hits to their name including the latest single, ‘Cola’ and the party favourite, ‘Can’t Help The Way’.

Hawkes Bay – don’t miss your chance to see the return of Drax Project to Blackbarn Vineyards on Saturday March 14, 2020, with special guests Foley. 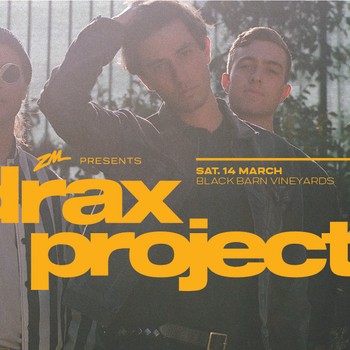