I went looking for a break - a blessing in these uncertain times - on a weekend away in Hawke's Bay. What I found was connection; soul-nourishing interactions with people and places, collaborations creating genuine experiences, history and today's reality side by side, entwined.

My honeymoon was in Napier, almost too many moons ago to accurately recall, a sun-scorched January week of winery tours after a four-hour drive from South Taranaki. This weekend I'm flying in for the first time, a scenic trip that's less than an hour from Auckland.

Ruapehu is snow-capped to the west, Mahia Peninsula a dark line beyond the shimmer of Hawke's Bay. The mouths of the Tūtaekurī and the Ngaruroro rivers tangle at the coast after snaking over the plains. Horticulture and viticulture divvy up fertile land: vineyards below the hills north of Bridge Pā, apple trees in blossom between Awatoto and the stopbank to the south. The truce seems to be holding between the rival twins - the tourist hub and coastal port of Napier and the rural service centre of Hastings - both named after British war heroes in India.

Everything seen on the flight in will soon be enjoyed by sightseers hankering for the nostalgia of a golden age of pre-jet propulsion aviation. A 1942 Douglas DC-3 airplane, a workhorse of the American and Allied victory in World War II, will shortly be making scenic flights from Hawke's Bay Airport. Roger McCutcheon, a long-time local aviation operator, has convinced the owner to base the vintage plane, built by women in Burbank, California, in Napier, where its provenance - the owner flew it on an epic trans global voyage from Paris to New Zealand, following the flight path of 1930s Kiwi aviatrix Jean Batten - connects it to the wildly popular Art Deco Festival held in February. 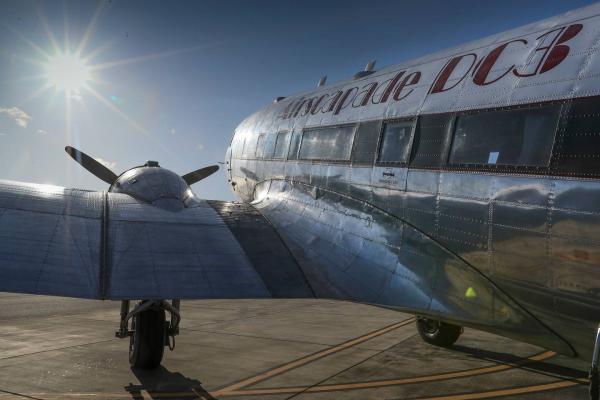 Jean Batten Clipper, C47 Skytrain is set to transport visitors back in time

Interest in flights is already sky-high, McCutcheon says. Having had the chance to look inside the plane myself, I know passengers on the scenic flights will have a nostalgia blast. On the tarmac, the plane's aluminium cladding gleams. Inside, it's a walk uphill from the rear door to your spacious leather seat, one of only 19. McCutcheon cannot hide the excitement in his voice when talking about being able to stand in the cockpit doorway to watch the pilots work with the virtually original instrumentation.

From planes to automobiles: a vintage car tour, run by the Art Deco Trust, is another retro way to connect to the history of Hawke's Bay's Art Deco architecture. For a couple of hours we are chauffeured by our knowledgeable driver John in an emerald-green 1938 Packard Six sedan through the Napier CBD and across the countryside to Havelock North and Hastings, where particular highlights were the Opera House and the Westerman's Building.

At a more sedate pace, Koru Enterprises share the Māori history of Napier on an easy walking tour, starting at the famous statue of Pania on the waterfront. Our guides Louise Cuthbert and Leo Te Kira begin with the legend of Pania herself, a maiden of the sea and the offshore reef, and the statue, modelled on local girl Mei Irihapiti Robin, now Mei Whaitiri, the mother of local MP Meka Whaitiri. The meaning of the name Ahuriri, five minutes from Napier's CBD, and of the local name for Napier Hill, Mataruahou, anchor the geography of the place to the experiences of the first inhabitants. Māori influence in the Art Deco architecture are seen in the Māori chapel in Waiapu Cathedral and the ASB bank building. We finish with a poroporoaki (farewell) at the award-winning Marine Parade redevelopment, where local Māori artist Jacob Scott's work is fully integrated into the design. 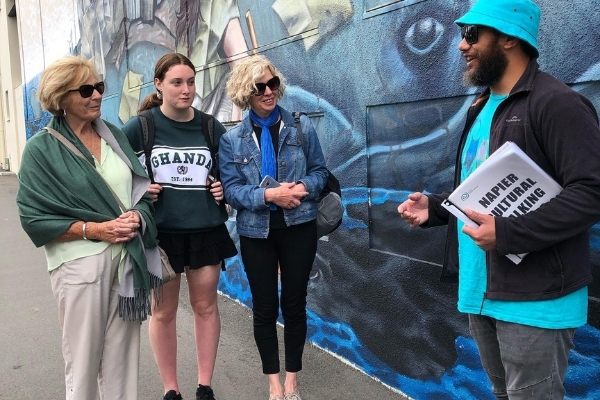 The Art Deco Festival has become a celebration of renewal, the result of a determination to work together to rebuild shattered communities after tragedy decades ago. At MTG Hawke's Bay, the exhibition chronicling the aftermath of the 1931 earthquake speaks to us amid a modern tragedy in the Covid pandemic. In a photo of coffins stacked by the Napier courthouse door, I see refrigerated trucks outside a New York City morgue. New Zealand has escaped those particular horrors today, but other parallels are there: New Zealanders came together in a show of solidarity to donate thousands of pounds to the homeless and destitute - a team of 1.5 Million; the Government was a necessary participant in guaranteeing the stability of the economy and underpinning the recovery. That Hawke's Bay thrives today, 90 years later, is a message worth receiving.

The Art Deco Masonic Hotel, an icon of the rebuild, was a recipient of Government loans and financial support in 1932, to some disquiet that public money was going to a drinking establishment. Art Deco Trust chairman Michael Fowler, a local historian, has just published a book on the hotel's history, which includes stories on famous guests (American writer Mark Twain spent his 60th birthday there in 1895; Queen Elizabeth II stayed during her 1953-54 tour; Jean Batten; the 1956 Springboks and the 1971 Lions touring rugby teams). Today, it sits fabulously refurbished, and its balcony is a literal grandstand for viewing the showcase events on Marine Parade during the Art Deco Festival. 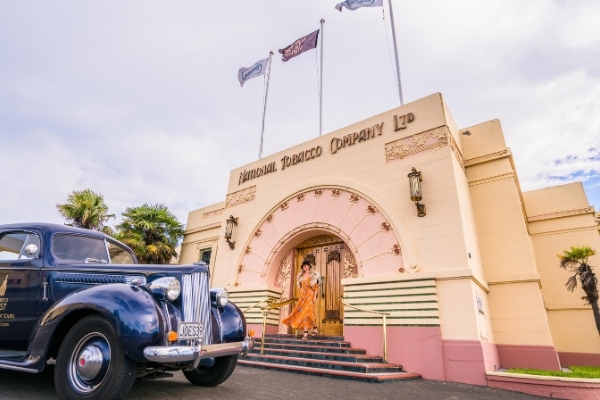 Connections keep coming. Architect JA Louis Hay, who went to school in Napier and spent the rest of his career and life in the city, designed two other Art Deco icons, the National Tobacco Company Building and the Central Fire Station, that now feature eateries to match the renown of the buildings.

The National Tobacco Company Building in Ahuriri was built for German tycoon Gerhard Husheer who demanded the very best in design and decoration. The Art Deco geometry is there - seen in the square face and the archway - with Art Nouveau ornamentation, which includes the roses and native raupo bulrush carvings on the entrance. The grapevine frieze is a prescient indicator of what now goes on inside at The Urban Winery.

Producing chardonnay from local grapes, fermented right here in the seaside suburb, you can see the barrel room through a picture window - but what you'll never forget is the eggs. Giant egg-shaped fermenters, a magnificent French oak one at the head of the room, the rest made of concrete against the walls. Winemaker Tony Bish brought the innovation back from a trip to Argentina, where it was discovered the shape removes the need to stir the lees during fermentation. More familiar French oak barrels fill the rest of the room. 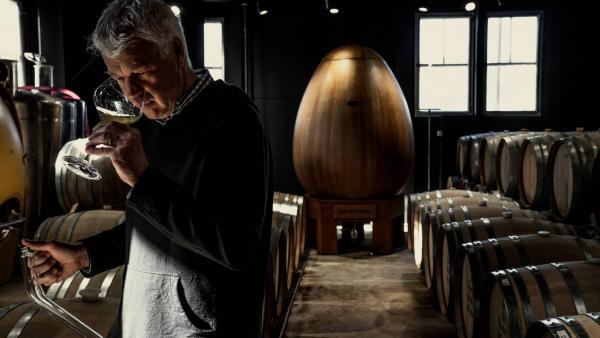 Whatever the shape or size of the fermenting vessel, the end product is great wine. We tasted the range: the everyday drinkable Fat & Sassy; zesty Skin in the Game; barrel fermented Heartwood; concrete egg fermented Golden Egg; and the powerful Skeetfield, made with fruit from old Mendoza vines.

The Bish family has also crafted a space to enjoy their wine with good food and live music. Oak barrel staves have been fashioned into giant light shades, tabletops and the bar facade; large-format photos, like stations of the cross, tell the story of how French oak barrels are made by hand; large padded baffles on the ceiling soften the acoustics in the hard wood and concrete room. While the family band Jess Atkin & Co served up jazz-tinged soul classics such as Heard it Through the Grapevine, we devoured chilli garlic prawns, chicken skewers and dumplings, unfamiliar cheeses such as French comte, Italian brigante, and baked goat's cheese with honey.

Louis Hay's other icon, the Central Fire Station building, was built of brick in 1926 and is an example of Art Deco's American Prairie style. After the 1931 earthquake it was rebuilt with steel and reinforced concrete to the same design. Now the street-front double-storey archways are picture windows for the restaurant, Central Fire Station Bistro. 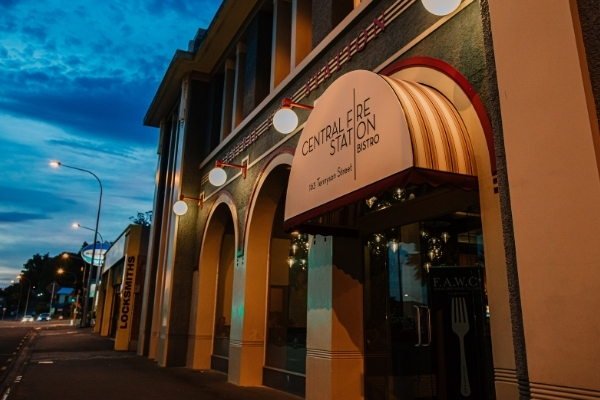 Our server Scarlett did a consummate job matching local wines - Halcyon Days gris noir from Havelock North, a Redmetal albarino, and a Maison Noire syrah - to our food choices: oysters; a tangy and sweet venison tartare with pickled carrot; a fatty, smoky, crunchy, melt-in-the mouth Matangi Station beef short rib to share ("They only had 27 cows!" Scarlett tells us excitedly, "So we snapped up all the short rib!"); and the silkiest olive-oil chocolate mousse. This was a truly memorable meal. 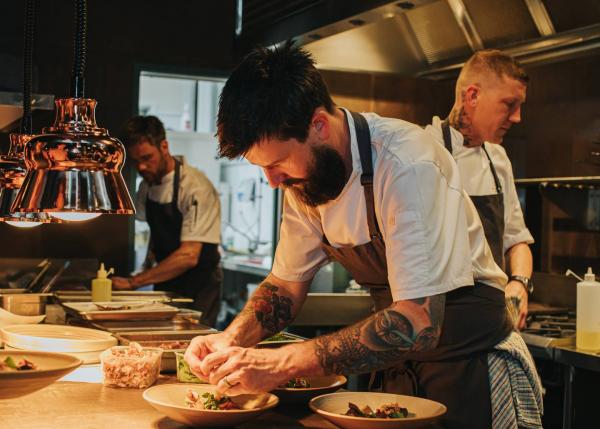 Sam Clark, owner and Chef in the kitchen of Central Fire Station Bistro

In contrast to the intimacy of the Central Fire Station bistro, Market St, the eatery in the Criterion Hotel building built in the Spanish Mission style in 1932, emphasises the structural heft of the architecture - white ceiling and beams, naked concrete pillars and polished concrete floors free up the narrower space for a more flexible dining experience. We sat by the window and filled up on a tasting platter (highlights: tender calamari, smoked salmon, and blue-cheese sausage from Central Hawke's Bay's Waipawa Butchery). Owner Steve Kelly was happy to suggest local drinks to complement: a bottle of Tigermilk IPA from Hastings brewery Brave; a lightly oaked and fruity Paritua Stone Paddock chardonnay and two roses - a crisp, sweet Clearview Estate Black Reef Blush and the drier, pale-apricot coloured Brookfields Fiesta. 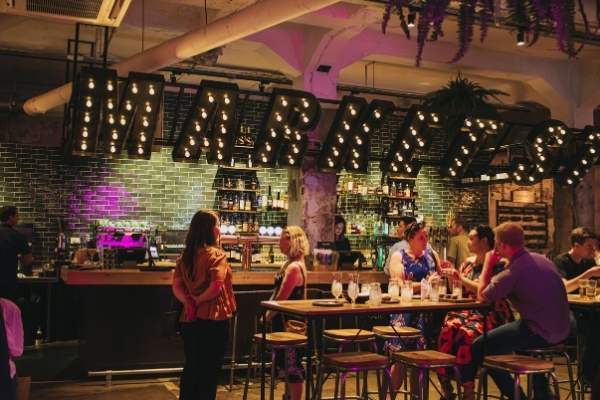 Eating and drinking is at the heart of so much human connection, and so it is here in Hawke's Bay.

Ajuna Eatery on Hastings St served the best granola I think I've eaten (the cream instead of milk might've had something to do with it), and the 22nd Century Synesso espresso machine delivered perfect coffee.

Hine, who guided us through a tasting at Church Road Winery, was the embodiment of the wines she poured: raised on a vineyard in Hawke's Bay, imbued with the essence of place, offering warmth and a shared experience of unforced hospitality. 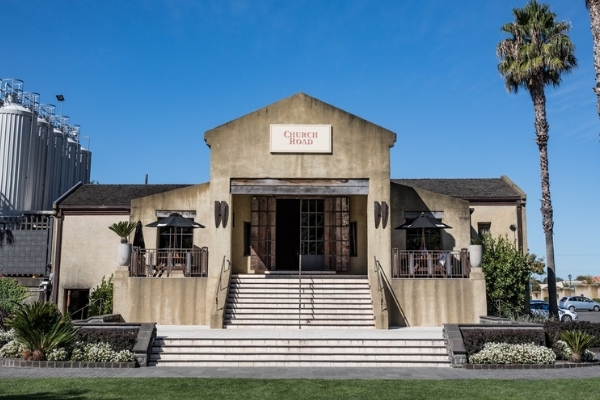 There was an easy confidence on show everywhere we went in Napier, and beyond. Confidence to connect the place - its history, geography and architecture - with the best food, wine and experiences the locals are producing. To come and relax here, to connect and collaborate in making lasting memories, is the promise on offer as we look to put the real difficulties of recent months behind us.

These words are inscribed, unattributed, on a plaque on the Napier waterfront: Although his buildings crumble to a mound of worthless ruins, Man has always found the urge to build a stronger city there…I have begun to build again, now planning to restore what life has shaken to the Earth; and I, in faith shall build my towers toward the sun a stronger city than was there before.

In 2021, it will be the 90-year anniversary of the earthquake, so, appropriately, the theme of the festival is "Salute to the Services", acknowledging those service people who have played an integral role in the rebuild and recovery.

Tickets are on sale now from artdecofestival.co.nz

Check out the arts scene