Fit For A Queen

Months of preparation and eager anticipation came to a head in December 1953, when Queen Elizabeth II and her husband, Prince Philip, arrived in New Zealand on her coronation tour (she was crowned in 1952).

This was the first time a reigning monarch has set foot on New Zealand soil.

Of course, no visit to New Zealand would have been complete without gracing Hawke’s Bay with their presence. The royal couple duly obliged on 6 January 1954, arriving at Westshore Aerodrome from Gisborne, before making their way to the Masonic Hotel through streets lined with bunting.

The ‘royal room’, number 129, had been redecorated for the occasion. The walls were painted in “cool, blue pastel shades” with new glazed chintz curtains, while the bedspread was a “gold threaded rose brocade”. On the side table were hand-painted miniatures of their children, Charles and Anne. The balcony had fluorescent lights installed in case of a night appearance by the Queen and Prince Philip.

The royal visit coming only eight years after the end of the World War II, stirred up patriotic fervour and devotion to the Queen. One newspaper reporter noted people were closing their eyes after seeing the Queen, being “fearful of losing that glorious picture of the Royal couple implanted in their minds”.

Fit For A Queen

This suite, fittingly named the Royal Suite, is available for you to book and spend a few nights being treated like royalty.

Indulge yourself with a luxurious King size bed, plush furnishings and seaviews.

To make it even more indulgent, take your pre-dinner cocktails on the adjoining balcony! 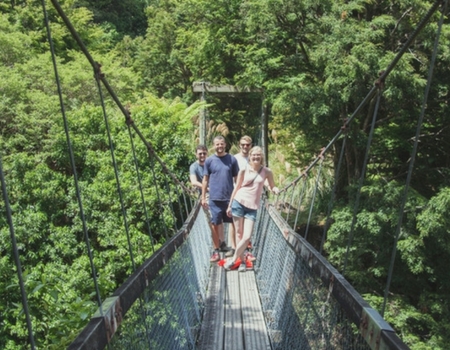 Take in an Art Gallery